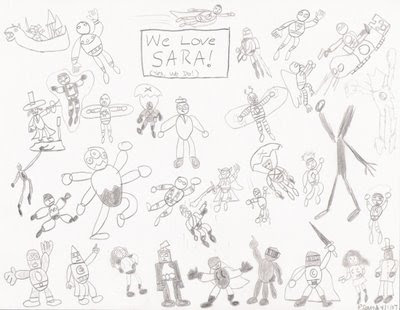 This piece was originally drawn and submitted to my deviantArt account on April 1, 2007. It was most definitely not an April Fool's Day joke.

I had been messing around with drawing some of my old childhood characters during this time, and was entertaining the notion of doing a big picture depicting a bunch of them in action. The original idea was for a "reunion" shot - and that picture did wind up happening eventually. But another idea jumped ahead of it in terms of importance.

I had a befriended a young lady who went by the handle of Sarapuu on dA in 2005. She was always so cheerful and positive, and she never failed to make me smile. Sara was having a rough go of things at this point in her life, and I decided to give her some giftart to maybe cheer her up. The concept quickly grew out of control, and incorporated characters from my current pantheon as well as the childhood favorites.

This picture accomplished its goal of bringing a smile to Sara's face. What's more, it sparked a creative outburst from her using my characters. I was humbled and amazed to see how she could breathe life into my crude sketches.

In a departure from my rule against discussing personal matters on this blog, I should mention that Sara and I eventually became more than just friends. That aspect of our relationship has concluded for now, but I still consider her one of the best friends I've ever known. She has changed me for the better, and I continue to treasure everything she brought into my life. She is the best, and don't let anyone tell you any differently.