Just a reminder to local peeps that Chaos Theory 2013 opens at 6 PM local time at the Henning Cultural Center in Sulphur, LA. We're due for some nasty weather, but really, maybe that's sort of appropriate for a show on Halloween night? It does alter some of the plans, but plenty of great art is still going to be available where it will be dry.

If you'd like a sample of some of the pieces in the show, there's a folder on the Henning Cultural Center Facebook page that offers just such a thing. And folks, there's going to be two floors of this stuff!

Hope to see you there! And speaking of which, I should probably make a Chaos Theory tag for this blog!
Posted by C. Elam at 12:15 AM No comments:

Big In The Philippines

So, this happened last week.

I have to say, I never anticipated the significant number of hits I've received from the Philippines. They are my Number #2 referring country, after the United States. Whether it's from an entertainment list site or a forum for "Pinoy Pistol Enthusiasts" (sadly, you must register to view it), I thank my Filipino friends for always being a consistent audience for OWARI. 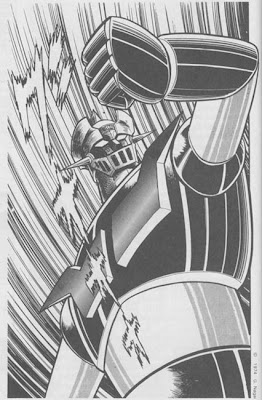 Sometimes, you just have to post a pic of Mazinger Z.

Scanned from Manga! Manga!: The World of Japanese Comics by Frederik L. Schodt.
Posted by C. Elam at 8:08 PM No comments: 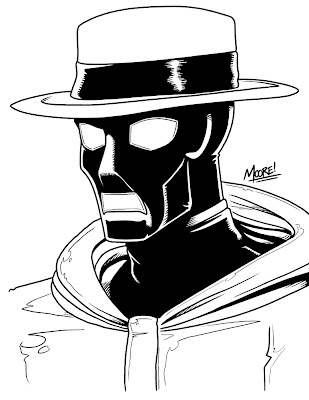 Hey, look at that! It's my character Urban Nightmare as drawn by Sean Moore last night! He looks just as frightening as this sort of street crimefighter should. He's going to strike fear into exactly the right people!

But wait, there's more! Urban Nightmare is on my Tumblr, too! And so is Rene Bond from the same stream! I just can't post her here because she's a bit too hot for this blog. If your heart can stand Rene Bond's NSFW awesomeness, you are invited to click here!

A year or two ago (bit fuzzy on precisely when now), a gentleman named John Harrison made known his intent to write a book about Rene Bond. He even posted an official announcement in January, complete with cover mock-up. But before that, he had started a Facebook page to support the project. That page was, to my knowledge, the only active Facebook presence for Rene Bond.

I cannot be certain exactly when it happened, but that page went away in the last few months. I don't know what the status is of either it or the book, but ultimately, it's not any of my business. I am still eager to support the book when and if it comes out, because I obviously think Rene's life is a subject worth exploring.

I did, however, mourn the presence of Rene Bond on Facebook. I kept checking periodically to see if the page had returned or if a new one had sprung up in its place. It's a tricky proposition, since the bulk of Rene's career would run afoul of Facebook's TOS. But y'know, there are pages for so many things under the sun, it seemed a pity to leave Rene out - especially since she did have a "mainstream" acting career.

So I have decided to step up and create the Rene Bond Facebook fan page I wanted. It is in its embryonic stages right now, and I don't have any long term plans for it in terms of content or posting frequency. I just wanted there to be a real page that Rene fans could "like" to show their devotion to the lady.

And obviously, none of this is a replacement for a real, honest-to-goodness fully-researched book on Rene Bond. I've invited Mr. Harrison to the page, whether he intends to go through with his project or not. Big respect and a tip of the cap to the man for wanting to get her story to a larger audience. I hope it happens.

My Rene Bond Facebook fan page is here. Give it some love if you like Rene! And thanks if you do!
Posted by C. Elam at 10:19 PM No comments:

I already owned a couple of issues of Weird Wonder Tales, but #22 was a bit of an eye-opener. For one thing, it is from much later than most of my Marvel monster reprint titles - 1977, to be exact. For another, it's the final issue, and brings to a close a very intriguing period for Weird Wonder Tales.

In WWT #19, a mostly forgotten, pre-Fantastic Four character named "Doctor Droom" was given a makeover and a new name and ushered into the Marvel Universe proper as Dr. Druid. Now, Dr. Druid isn't exactly one of the more popular superheroes ever, so it's sort of interesting to see him promoted as the star of a comic book. Granted, his series is just altered reprints, but he's not someone you would pick out in retrospect as having breakout potential.

The revelation comes in the letter column(!) of the issue, which has no letters, but rather an explanation that the book is cancelled and the reasons why Dr. Druid came into existence. More than just a hero, he was envisioned as a host character, giving continuity to tales never intended to be connected. It's rather ingenious, and a good attempt at suckering in hardcore superhero fans who might normally take no interest in older anthology stories.

The stories themselves are nothing outstanding, but they are enjoyable. The Dr. Druid story and the story he "hosts" are Lee/Kirby/Ayers collaborations, and while not to the level they would reach in short order, they are still very good. The third is a rare Joe Kubert art job for Marvel, complete with a "shocking" twist ending (and dumb authority figures).

It's no surprise Marvel chose to make Weird Wonder Tales #22 the last issue to free up room on the schedule for more promising books, but it's not a bad way to spend 30¢ at all. I even like the knowing blurb added to the Dave Cockrum/Ernie Chan cover. "Dr. Druid falls victim to the most fearful fate of all!", and you might ask, "Well, what was it?"

Why, having his book cancelled, of course.
Posted by C. Elam at 8:23 PM No comments:

I was unaware of The Rialto Report until last night, and I fell in love with it at first sight. According to its own info page, it "is a series of podcasts dedicated to expanding the historical record on the adult entertainment industry between the early 1960s and the mid-1980s." I won't tell you I've listened to all of them, but I'm in the middle of my third one and they have all been fascinating. If you have an interest in the people and stories behind this particular subculture and industry, I recommend it highly.

In fact, I'm going to go a bit further than just recommending this podcast. The first interview I tried was the most recent, with Eric Edwards. I'm not sure what exactly I was expecting, but I can definitely say being moved to tears was not on the list. Edwards' story is engrossing, and at times, poignant and sad. Some of his memories of female performers Chris Jordan (his first wife) and Arcadia Lake (called "a life companion") are especially touching. Bet you wouldn't figure on hearing a poetry reading in this kind of interview.

Give it a listen. No matter what your feelings on pornography, you will find it enlightening.
Posted by C. Elam at 11:13 PM No comments: 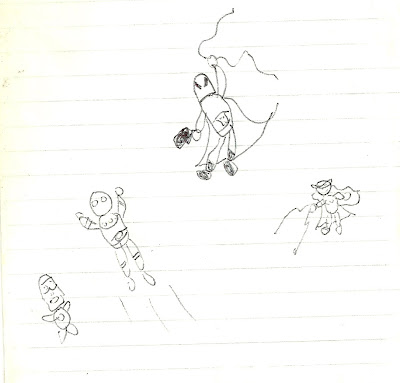 This actually precedes the Cap/Shelly doodles I uploaded almost a month ago. Unfortunately, the pen was particularly spotty while I was working, so the scans are not particularly tight.

The centerpiece here is the Phantom Rogue. One of the reasons I have always enjoyed his character is because he's really fun for me to draw. Of course, I couldn't neglect Captain Satellite, and this version is pretty similar to the other doodle.

The other two figures are perhaps not quite as polished, but they at least interest me. Firegirl was an attempt to see how well I could get her across with an absolute bare minimum of lines. Blue Behemoth is almost like a bobble head version. I don't even know why.
Posted by C. Elam at 11:53 PM No comments: Yes, it's the time of year when we celebrate the life and career of actor Peter Falk and the TV detective he made famous! Happy Columbo Day! 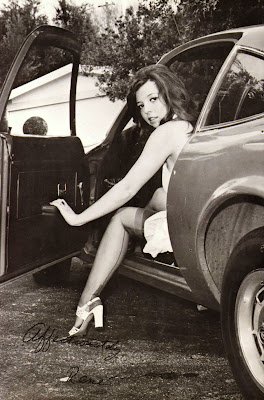 There's not a whole lot for me to add to the birthday entry for Rene Bond I posted last year. Well, I could mention that I have become a pretty popular destination for her on the search engines since then, and I'm not exactly sure why. I guess I should know by now not to question the vagaries of such things.

Rene Bond would have been 63 years old today. She might be gone from this Earth, but never from our hearts. R.I.P. Rene.
Posted by C. Elam at 9:07 PM No comments:

A Night To Remember

If you don't know much about the band All Time Low, don't worry, because I don't either. I first heard about them back in April when they visited Sydney Corcoran and her mom in the hospital. You see, Sydney had tickets to their show, but couldn't attend for obvious reasons. So they came to see her instead! I remember thinking, "What a bunch of nice guys!"

We've talked about Pason here a few times, and all of you should know by now how much I admire this lady for so many reasons. She hasn't had an easy path, but she has persevered with class and determination. I've mostly written about her acting career here, but today, we're going to look at something a little different - but still related.

Pason was recently diagnosed with skin cancer on her forehead, and she has written about her experiences here. She's also included some photos, and they are just as eye-opening as her account of what happened to her through the whole process. Sounds like the cancer was caught in time, so thank goodness for that!

While you're over there, why not check out the rest of Pason's site?

Email ThisBlogThis!Share to TwitterShare to FacebookShare to Pinterest
Labels: pason

"Giant Robot, Use Your Galaxy Gear!"

OK, here are both commercials as featured on the Samsung Mobile USA Youtube channel. The "A Long Time Coming" one is particularly entertaining, since it opens with footage from JOHNNY SOKKO AND HIS FLYING ROBOT! There's also footage from such shows as GET SMART!, THUNDERBIRDS, and (as promised) MARINE BOY.

I saw this commercial during the NFL games this afternoon. Wow, it really got my attention! I mean, I wasn't expecting to see both Power Rangers and Johnny Sokko! But even if those shows aren't your cup of tea, there are others that may just push your nostalgia buttons.

There is another, longer commercial with more clips and more shows (including Marine Boy!). This is all I found online right now, and I can't guarantee this particular upload will last. I'll probably be revisiting this subject in the near future.

I saw this story earlier tonight, and found it so utterly charming that I thought people would enjoy it. Heartwarming and cool all at the same time.

If the MSN link expires, you can see the pictures (and read the English text) at Vintage Henshin, originally posted by Purplevalkyrie.
Posted by C. Elam at 11:21 PM No comments:


Watching You by ~celamowari on deviantART

There's this guy at work named Ron, and I think he thinks I'm stalking him.

I'm not sure he's wrong.