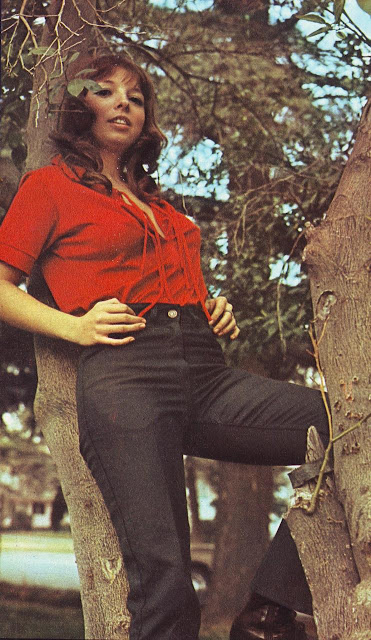 According to the sources I've seen, today would have been Rene Bond's 62nd birthday. Now, you're forgiven if you have no idea who Rene was. I appear to have only mentioned her once on this blog, and that was earlier this year. But if you follow my Tumblr account, you are probably well aware of my fondness for Ms. Bond. There is a (NSFW) Rene Bond tag on OWARI 2.0, and it has gotten its share of use.

Like a lot of people, I first became aware of Rene Bond through Something Weird Video. For whatever reason, Rene's picture in their catalog (from the same photoshoot as the above, oddly enough) captured my imagination. I really needed to see this "Rene Bond" for myself, live and in color on my TV screen.

Before I got that opportunity, I learned something I probably should have realized all along. I had assumed in my youthful naïveté that Rene Bond had been a B-movie actress - one who shed her clothes frequently, of course. Well, she was, but that was only one facet of Rene's career. She was also a model. A nude model. Fair enough. Oh, and an adult film star, too.

...I don't think my 25 year old self was quite prepared for this revelation. The actress I had been fantasizing about off and on for about two years...had gone all the way? Well, that settled it - I needed some Rene Bond films in my life!

It would be years before this ambition was fulfilled. In 1997, I had no money to investigate Rene's career. Time passed, my interests shifted, and my Rene Bond crush faded into memory. Well, until a few years ago, when I inadvertently stumbled across one of her films on DVD in a local store.

Naturally, those old memories resurfaced and I was compelled to buy the movie. As I watched for the first time, I really did fall for her. I knew she was cute in an appealing way that seemed at odds with the sort of thing she was doing on-screen. Yet there was more to her allure than just beauty. She had a charisma and likeability that really transcended the role she played. There was just something about her that struck a chord in me.

I have picked up a number of Rene's movies since then, including such worthies as COUNTRY CUZZINS, FRANKIE AND JOHNNIE... WERE LOVERS, and NECROMANIA (the last an Ed Wood film!). Rene turned out to be a surprisingly decent actress for her material. This wasn't always in evidence, but certainly, her performances were a cut above most of the folks surrounding her. She was also a singer, and again, better than I would have expected in that capacity.

Here is the trailer for FUGITIVE GIRLS, a hilariously weird film that also involved Ed Wood. Rene isn't the star, but this is one of the more "blog friendly" clips of her available at the moment.

Rene apparently dropped out of "the biz" in the late '70s, though stuff with her would continue to come out long afterward. I suspect she was in the middle of shooting one of her movies when she quit, considering TEENAGE FANTASIES II seems to have been delayed for no other good reason until 1981. Usually, that would be the end of the story. However, there are a couple of postscripts to Rene's fame.

The first comes from 1985, when "Rene Levine" showed up on the game show BREAK THE BANK with her new husband. Yes, this was Rene Bond years after leaving the public eye. Her hair style was different, she had gained a little weight, but it was still undeniably her. I suppose there wasn't a lot of crossover between game show viewers and X-rated film viewers. I do like the idea a friend offered, of one lone stagehand recognizing her and almost drowning in his own flop sweat.

Seeing Rene a bit older, and hopefully wiser, is fascinating. She does really well, and more or less carries the day for her team. Based on the scant (legit) interviews with her I've seen, I got the idea she was pretty intelligent. Looks like that was on the money.

Usually, only the first part of this show gets linked. Here is a playlist that should play all three segments in order. If the embed doesn't work, you can give this link a try.

I don't know the exact reasons for Rene's premature death, except that it's commonly attributed to "liver problems." Whether those problems were due to natural causes or personal demons is something that I guess isn't important in the big picture. Rene Bond left this world with probably no idea she was on the verge of becoming a cult icon and essentially immortal.

That's the biggest tragedy of all. If (and I stress if because I have no idea) Rene was beset with personal demons, she was on the cusp of learning a whole new generation of fans had discovered her and fallen in love. People like me. Maybe that would have made a difference. Maybe she might still be alive today, able to enjoy a respect and adoration that wasn't afforded her in her active career. Maybe she could have even reaped some of the profits that others have been tallying up though the "Rene Bond" name.

Maybe. Or maybe it's just one of life's cruel ironies that Rene Bond was taken from us right when her legend was growing. It would be years before we learned she was gone, and I'm not sure anyone even knows where to mourn her. I don't.

Happy birthday, Rene. I'm sorry I'm not able to tell you that in person. I hope you've at least found peace.

If you'd like to know more about Rene's career, I suggest consulting her IMDB page and her (NSFW) IAFD page. Neither is perfect, but they will give you a good idea of her filmography.
Posted by C. Elam at 2:15 AM