Remember When You Were Young?

I suppose I should explain what last week was all about. Don't worry, there'll be a prize at the end.

Recently, in my attempt to sort through DVD-Rs and CD-Rs, I ran across a disc containing files I had saved circa 2003. Some of it was corrupted, but most of it was still intact. It was a little like getting a letter from the me of 10 years ago. It made me reflect on my only other file storage "artifacts" - a passel of Zip Disks. I had transferred what I had termed the important stuff years earlier, but there was still a bunch of other things sitting on them. I wasn't even sure what anymore.

I had a brainstorm about a week and a half ago: Why not copy everything to a flash drive? I certainly have more than a few lying around. I reinstalled the Zip Drive on my old laptop, and after it crashed the OS the first time (no joke), I was able to salvage the contents of 11 Zip Disks and 1 CD-R onto a single flash drive. This led to me going through all my various flash drives, too. Finally, I am...well, not done, but much closer to have everything organized how I want it.

This has been both tedious and fun. Tedious because it seemed it would never end, but fun because I kept uncovering things I had forgotten. Today, I am going to share one of those forgotten files with you.

This is an icon I made in 2004 for a LiveJournal clone site. Later, it found its way to my LiveJournal itself. It was even one of the causes of my return to my "art" roots on deviantArt, but that's a story for another day. The art is by Owen McCarron, and is from Fun and Games Magazine #5 (January 1980) from Marvel Comics. The character is Blue Diamond, and the caption is adapted from Pink Floyd's "Shine On You Crazy Diamond" from the album WISH YOU WERE HERE.

Now, I have kept track of this icon in my "graphics" folder. I thought it was pretty funny, and people liked it. So imagine my surprise when I'm going through the folders from an old Zip Disk and discover a much larger "test" version with the caption in a red font. I am stunned I saved it. But even more stunning, I also saved the original template I used for the icon. It has been sized-down from the original scan, but it's still large enough to make anyone happy.

Internet, I humbly offer to you this image of Blue Diamond playing the guitar. I'd appreciate credit if you use it, but I understand that probably won't happen 85% of the time. It's still worth it to me to have it out there. But please, try to include the name of the late Owen McCarron, huh? He's the genius who came up with this madness, not me. 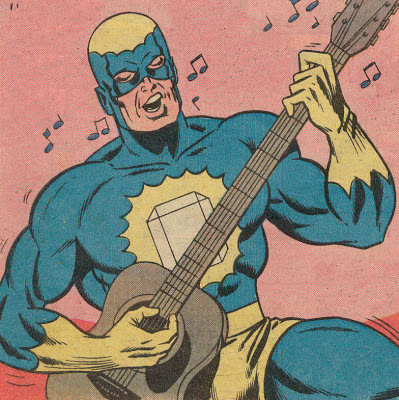