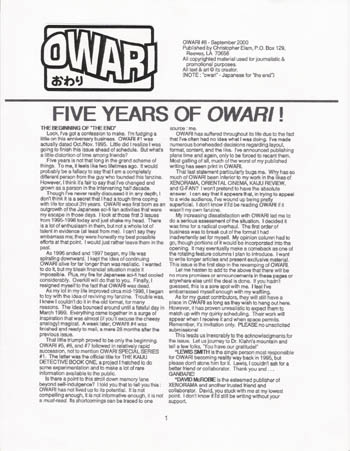 Haha, oh man, reaching five years of OWARI was such a big deal to me in 2000. Little did I know that I'd be writing a review of that fifth anniversary celebration on my blog (a what?) on the Internet some twelve years later. Still, I had undergone a lot of turmoil and personal growth from 1995-2000, so it all seemed appropriate. You can sort of see that I went through a litany of names to thank up top. Alas, I wish I could tell you I am still in touch with all of them, but such is not the case.

In addition to giving a history of OWARI up to that point and a chronicle of the guy who created it, I also fell on my proverbial sword in this introduction. As I've outlined in prior installments, I was unhappy with the direction of OWARI's contents, and that all comes to a head in this issue. I really think I was perhaps too hard on myself, but that was just me trying to put out something that personally satisfied me and failing. I pledged to "write longer articles and present exclusive material." So I guess recycling that XENORAMA column in the prior issue was a sore spot for me.

However, I did live up to the promise to write longer articles in a BIG way in OWARI #8. This was the issue which included "The Big Bang Explosion," a lengthy piece on BIG BANG COMICS that I spent a good portion of the summer putting together. Yes, this was the long-promised coverage of BBC that I had originally envisioned as a standalone fanzine. I really don't think I would have done a better job than what wound up seeing print in this issue.

Y'see, "The Big Bang Explosion" was the longest article I ever created. What's more, I laid the silly thing out, and while no design masterpiece, I had clearly learned some lessons in five years of fanzines. The article has a few errors, and is a little bit all over the map, but by God, I was PROUD of it. Twelve years hence, I'm still pleased with it. I'm also happy it met with the approval of writer/editor Gary Carlson and other folks in the Big Bang firmament. That article was really my love letter to the book that helped me retain my sense of wonder.

I also included a cartoon of my own.

2 Watchmen by ~celamowari on deviantART

While "The Big Bang Explosion" was perhaps my greatest triumph in the pages of OWARI, that came with the price that there was scarcely any room to include anything else. However, I did inaugurate "The View from Godzilla Tower" on the last page. This was my effort to create a column for OWARI devoted strictly to kaiju/tokusatsu stuff, and was envisioned as being one of several rotating features that would appear when I had the material. This particular installment focused on a dubbing mystery that I am not sure now I answered correctly and the fake "nude scene" from TERROR OF MECHAGODZILLA.

And that, as they say, was that. Between my anniversary introduction and my article on Ultiman, Knight Watchman, Thunder Girl, and the rest of the Big Bang Gang, there wasn't space for anything else in 8 pages. Still, I felt like I had turned a corner and was on my way to making OWARI something memorable. I even held out the hope that I might be able to pick up some new readers.

That did happen, but not as much as I would have hoped. Gary promoting the 'zine in the BBC lettercol garnered some new eyes, but alas, not many. The bitter taste of THE KAIJU DETECTIVE being mostly ignored was still fresh in my mouth, so while I was encouraged, I wasn't exactly doing cartwheels. Finding readers was an uphill battle.

Oh, one more thing. Stripped into the layout of Page 2 at the last minute was this simple statement: "This issue dedicated to the memory of CHARLIE BENOIT, a good guy who was taken too soon." I'll tell you more about Charlie when we get to OWARI #9.