2012 INTRODUCTION: This article was originally posted on February 2, 2005 to The Big Bang Gang, a short-lived fansite devoted to Big Bang Comics maintained by yours truly. After closing that site down, I submitted it to the official Big Bang Comics site. It may still be there; I haven't checked lately. However, I made one crucial oversight - since I was the sole writer for BBG, I left my name off the page. When it got posted to the official site, I had neglected to add it to my submission. Ooops.

I've made a few minor edits for this version. I've also omitted a small image of MEGATON #1's cover. The reasons why will be found in the postscript. For now, enjoy a little retro, retro comics history. Also, please excuse my ancient GIF image at the end.


Top Secret Origins: Ultiman Family
Ultiman is considered one of Big Bang's top tier characters, so it's easy to forget that his first appearance predates Big Bang by 10 years. What's more, he wasn't even a star back then...and his name wasn't Ultiman!

MEGATON #1 (Nov. 1983) was the first comic book produced by Gary Carlson and one of the features in that debut issue was "Ultragirl." Yes, Ultragirl was there at the beginning too, and her father (who was called "Ultraman" at that point) was only a supporting character in her strip. That initial story opens with Chris Kelly screaming in agony from the power of the meteor that gives him his powers and then flashes back to his origin. We see the meteor crashing into his space capsule and a symbolic panel of him in his heroic identity (reproduced below). 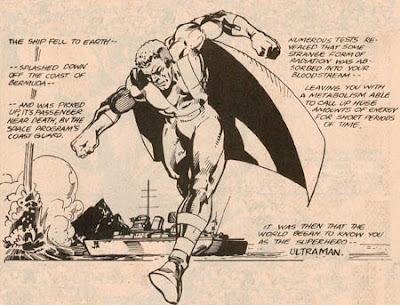 Following this is a scene with Chris Kelly's (unnamed) wife and his infant daughter Christie, which implies that all is not right in Ultraman's life. Sure enough, we quickly learn that the great hero has become estranged from his family. He's also turned into a bit of a recluse, holing up in his mountain HQ as he works to rid himself of his powers.

(As an aside, when the first 3 pages of this story were reprinted in BERZERKER #2, one of the rewrites altered this plot point. In that version, Chris Kelly was attempting to recharge his powers rather than get rid of them. This is consistent with the later MEGATON stories, but I'm getting ahead of myself.)

Jumping to the present, Ultraman has himself hooked up to a machine when something goes radically awry and everything blows up. His now-teenage daughter Christie (who had just arrived for a visit) is also caught in the explosion and awakens to find herself clad in a version of her father's costume. Before you ask - no, this conceit is never explained. Christie just accepts it and soon discovers that she has gained powers just like her father's. Flying home for a brief interlude with her mother, she sees a TV report about a radioactive monster terrorizing a beach city. She races to confront the creature and is horrified to learn that it is her father!

The first Ultragirl story is a difficult one to critically evaluate at this late date. It has a strong basic concept and some competent early work from Jackson "Butch" Guice. However, the scripting is weak in several spots. Interestingly, though the plot is credited to Gary, the writer is listed as "Salamander Deadfish." I don't know the true identity of Mr. Deadfish, but, if it does happen to be Gary, he has produced far better stories since this one.

There's also the matter of the last three pages of this 7 page story. While Guice did breakdowns for the whole thing, the penciller was actually James Cassara. Guice inked and lettered the first four pages himself, then turned the rest of the story over to someone else when he became swamped with work at Marvel Comics. Gary later admitted in the letters page to #2 that this unidentified person's work bore no resemblance to Guice's work, thereby killing artistic continuity. To meet an impending deadline, those three pages were "rebuilt" by committee into something that seemed to match the preceding four. The results were still not what anyone would term satisfying.

Between publishing delays and increased emphasis on other features, Ultragirl's story would not be concluded until over three years later. Even then, the conclusion was just as much a retelling of the first story as it was a continuation. It took place in the "Megaton" feature (the book's namesake, though not its only star) in MEGATON #7.

In this story, Ultragirl fails to stop her father's rampage and retreats to his wrecked mountain headquarters. There she encounters the hero Megaton (looking to take Ultraman up on his offer of pointers on the hero biz) and recruits him to aid in her fight. The two of them engage Ultraman in a furious battle in the Mojave Desert, but neither of them can take his measure. Finally, Ultraman comes to his senses as he's draining his daughter's powers...and her life. He flees from Megaton and Ultragirl right before he seemingly explodes from a power overload. As it turns out, he only discharges all of his body's meteor energy and loses all of his powers in the process. However, his body then tries to leech away the energy from Ultragirl's body, leading him to make a fateful decision. 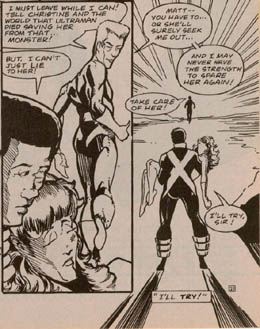 The final (?) fate of Ultraman/Ultiman, from MEGATON #7 (art by Gary Thomas Washington)

Needless to say, this probably wasn't the original plan for the Ultragirl story that was begun in #1. This story rewrites most of the previous tale and alters at least a couple of details. For instance, this is the first time Ultraman is said to have been recharging his powers when the fateful accident occurred. Most of the changes are for the better though, and Gary's story and dialogue are leaps and bounds better than what was in Ultragirl's debut. There's also the surprising plot twist of Ultraman surviving the end. This seems like a set-up for a sequel that never came to pass.

On the art side, this issue marks Gary Thomas Washington's debut on the Megaton feature. He seems an odd choice to succeed Angel Medina as penciller given their radically different styles. Washington's cartoony but expressive style feels as if it would be more at home on a strip with a lighter touch. He does a fine job though, so no complaints.

This issue's backup is the second and final solo Ultragirl story of MEGATON's run. It's a quiet affair that explores Ultragirl's relationship with her mother. It's far more effective than the handful of panels devoted to the subject in #1. Gary also wrote this one, and the art is by John Thompson & Mike Matthew.

Before we get to the next issue of MEGATON, I should pause briefly to discuss MEGATON EXPLOSION #1. This was a free 16 page book published by Megaton Comics to promote their expansion plans. It's also notable as Megaton's only color book. It consists of "fact file" entries for many of the characters of the line and both Ultraman and Ultragirl are represented. We learn a number of interesting tidbits in it, such as the name of Ultragirl's mother (Cynthia) and the year of Chris Kelly's meteor encounter (1964).

Ultragirl returns in a supporting role in the two Megaton stories in MEGATON #8. In the lead, she gives Megaton support as he works to dispel the rumor that he has been cured of AIDS. (NOTE: Megaton had been dying of a heart condition that was cured by the process that gave him his powers. He never had AIDS, but, just like real life, that never stopped the tabloids.) In the backup, the two heroes have dinner and go for an after-meal flight where they discuss their mutual attraction and share a kiss. Gary wrote both tales, with Gary Washington again doing lead story art and the team of then-newcomer Rob Liefeld & Tim Dzon handling the backup. I'm no Liefeld fan by any stretch, and it would be easy to rip this story's art to shreds. Truthfully though, it's not bad work for an early job. Some of the facial expressions are off, but it looks pleasant enough. Too bad Liefeld later went off in such a radically different direction.

Ultragirl would have been a cast member of the MEGATON Volume 2 series that was announced in that eighth and final issue of MEGATON. Alas, it was not to be. Megaton Comics disappeared before the end of 1987, due in large part to unstable market conditions. If any work was completed on MEGATON Vol. 2, it has never seen print, and likely never will. However, this is not quite the end of Ultraman and Ultragirl's MEGATON-era history.

One of the books Megaton Comics announced but did not publish was a Christmas special. In 1993, Don Chin's Entity Comics put out MEGATON HOLIDAY SPECIAL (coverdated 1994), which finally published some of the material from that ill-fated special. Among the contents were a Megaton/Ultragirl story and a one-page gag strip by Ed DeGeorge & Fred Hembeck that co-starred Ultraman. Oddly enough, the HOLIDAY SPECIAL came out during the same period when Big Bang was getting off the ground in the back pages of BERZERKER. Ultraman was retroactively rechristened "Ultiman" in the previously-mentioned BERZERKER #2, presumably to avoid confusion with Tsuburaya Productions' giant hero Ultraman (then starring in a comic from Nemesis Comics/Harvey Comics). He reverts to his old name in the HOLIDAY SPECIAL, but he's been Ultiman ever since.

It remains to be seen how much of the MEGATON material will be part of the Big Bang canon. Some of it still fits, and, as mentioned earlier, part of it was reprinted in altered form in BERZERKER. However, other parts have been flatly contradicted (i.e., Christine Kelly's mother is now named Arlene rather than Cynthia, Ultiman began his career earlier than 1964 since he helped found the RTA at the behest of President Kennedy). Only time will tell if we get another take on the end of Ultiman's career and the beginning of Ultragirl's.

MEGATON Index For Ultraman (Ultiman) & Ultragirl
2012 POSTSCRIPT: My biggest reason for omitting the thumbnail cover for MEGATON #1 from this version of the article is because Gary Carlson has recently launched an entire website devoted to MEGATON and Megaton Comics! Visit it at megatoncomics.com for all sorts of cool stuff! And be sure to tell him Christopher Elam's OWARI sent you!
Posted by C. Elam at 10:21 PM