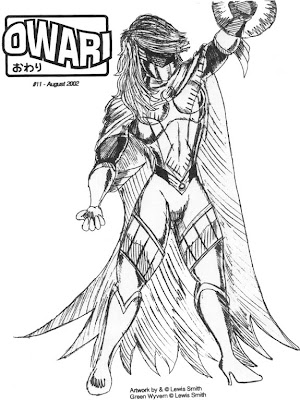 Here's something you never want to think when you're reviewing your past work: "Wow, I really half-assed that one." Yet, that is my first reaction whenever I look at OWARI #11. I don't think that was ever my intention, but the results are kind of inescapable. Not a good sign right off the bat.

Thanks to my archaeological expedition into the long-forgotten folders of old Zip Disks, I have the promo piece I wrote about this fanzine in 2002 for the old OWARI site and message board. Here it is:

I'm not sure if it can be scientifically proven that CURSE OF THE ALPHA STONE is the worst film ever made, but it's certainly a strong contender for the title. Whoa, that movie is something! On the surface, it appears to be just a film about a college professor trying to create the Philosopher's Stone. But it's more, much more. Here's a movie so demented that I felt compelled to write about it.

Remember those glory days of OWARI Vol. 1? Me neither. Lewis Smith does though, and in the latest installment of the column MORE TRUTH THAN REALITY, he reflects on the single biggest project we had going during that time. Yes, it's time for more RETURN OF JETMAN nostalgia, but with a twist courtesy of li'l ol' me. (Insert cryptic laughter here)

Well, that certainly makes it sound good, doesn't it? Let's take a look at this issue one piece at a time. Only then can we fully understand how it really came together...or didn't, as the case may be.

First, we have the cover. This is the first time I ran a cover image on OWARI since #3 back in 1996. Though Lewis Smith's rendition of his Green Wyvern is amazing, my using it as the cover is a bit of a cheat. That particular piece of artwork was originally done as the cover for one of the "Return of Jetman" books that by 2002 were obviously never coming. Of course, my re-purposing the image for OWARI #11 did fit with its contents. More on that soon.

The contents of OWARI #11 proper kick off with an editorial wherein I admit it took me far longer than I'd anticipated between issues. I even confess that I had considered scrapping the fanzine entirely. It was only my inability to develop a satisfactory website in 2001-02 that led me back to the 'zine format. There's an "uh oh" right there.

I admitted that I downsized from previous issues, but make no attempt to rationalize why. I...really don't know what to say about this. Technically, the five pages of material are equal to #4 and #5. In practice, with my decision to go with a bigger (i.e., more readable) font, there's really no contest. For the kickoff of OWARI "Volume 3" (#1-#3 were Volume 1 and #4-#10 were Volume 2), this is a very inauspicious way to start.

It didn't help matters that this issue was plagued with production problems. The layout pages look much different than usual, and that's because the word processor was out of black ink. I solved this problem by simply printing the pages in color! After all, since everything would be in B&W, it wouldn't be an issue, right? Well, it did make things look less crisp, but maybe that was just obvious to me because I was the one behind the curtain. A much bigger (and even less obvious) problem occurred with my review of CURSE OF THE ALPHA STONE.

CURSE OF THE ALPHA STONE is a terrible movie that I bought on used VHS in 2002. One day, I may inflict its horrors on all of you all over again. But it had traumatized me so much in 2002 that it was a prime candidate for a review. This particular piece is on the one hand kinda humorous, as I am both enraged and exasperated as I discuss this awful videotape. On the other hand, it makes me wince whenever I remember what happened with regards to it.

You see, I had written this entire article out, and then because of now-forgotten circumstances, I lost the whole thing due to some blunder on my part. This led me to have to reconstruct it from memory, and unfortunately, both my passion and coherence were lessened in the rewrite. I even had to attach an addendum after the review itself because I had forgotten a key component and couldn't bring myself to try to figure out a way to seamlessly incorporate it into the body of the article.

I mentioned above the word processor. Yes, I was still using it to put together the fanzine, because I hadn't put any thought into how to utilize a computer for that purpose. However, this old dog did learn at least a few new tricks. 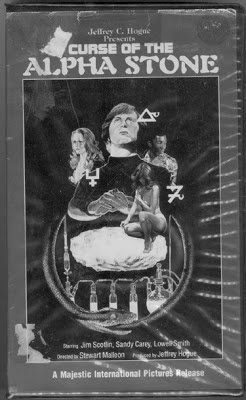 That is the actual image of the CURSE OF THE ALPHA STONE clamshell video case used in OWARI #11. It's a scan of my copy, and this is the only version of it that exists in my files. I suspect I may have scanned it in grayscale since I knew it wouldn't be in color. But if there was a color version, it is lost to the ages.

Our next (and last!) feature is another installment of Lewis Smith's "More Truth Than Reality." This column is entitled "Whatever Happened to Return of Jetman?" and was actually written in 2001. It was Lewis' fond reflection on ROJ and was intended as our final farewell to the project after determining that our much-planned revival of it wasn't going to happen.

...So it's ironic that when the column finally saw print, I had to add an update informing the readership of the impending debut of the very first version of the Return of Jetman Homepage. I did manage to finish that first story, and with more than a little input from Lewis in the process. Sometimes, I get things right.

OWARI #11 was not one of those times. That's all that was in the issue, folks. I had been working on something about the Blue Öyster Cult concert I attended on May 6, 2001, but it never made it to the typing stage. I'm not sure I even finished it. It would have rounded out the issue into something a bit fuller, but I was apparently set on it only being 6 pages.

I alluded to having a plan for OWARI #12, but that "it may be awhile." That plan, whatever it was, would not come to fruition. Even with how little I put into the issue, the production problems killed my enthusiasm. Besides what I've already mentioned, getting suitable copies made at my formerly reliable copy shop was a nightmare. I never managed to get a single cover for the issue that didn't have a line running across it. I went to all the effort to add a cover to my issue and I couldn't even present it the way I wanted it?

The reaction to OWARI #11 was predictable. That is to say, there was little to no reaction. By this point, I had an audience, however modest, on the web. You'd think there would be interest in receiving a free fanzine. You'd THINK that, but you'd be wrong. I was optimistic in my printing of the issue, and I ended up unloading about as many as usual.

That was all the proof I needed that it was time to go. I made the announcement in the thread "The past, the present, the future..." on the old OWARI Message Board on December 31, 2002 that OWARI #11 was the last issue of the fanzine. You'll notice that many of the reasons I've cited in past installments are brought up there. I should hasten to point out that I actually didn't go back and read that prior to starting this series. That's really what was on my mind after THE KAIJU DETECTIVE went nowhere back in 2000.

Considering how disappointingly meager my contributions were to OWARI #11, perhaps it's just as well I pulled the plug when I did. I'm not sure I could justify a string of issues this skimpy. So it was that OWARI "Volume 3" ended as it began and brought a close to the fanzine era of my little enterprise.