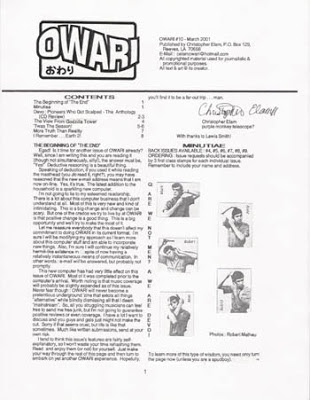 The single most momentous thing about this particular issue turns out to be in the introduction column "The Beginning of 'The End'" itself. Therefore, we'll save it until the conclusion of this entry. Suspense!

I can't quite pin down my thought process here. I'm pretty sure it was just a matter of trying to continue the changes I'd instituted in #8, especially since #9 was so unusual. You can see me going in that direction and possibly trying to position OWARI as something a bit more substantial. As for my success, well, that's debatable, but I'm clearly making an effort.

I opened with a review of Pioneers Who Got Scalped, a two CD anthology of the band Devo issued by Rhino. This review is valuable to me in that it gives an overview of how I got into Devo in the first place in 2000, less than a year after it happened. This isn't a bad piece of writing at all, and I'm impressed that I thought to link Devo with the likes of Kiss and Gwar. The music may not be similar, but the creation of a unique mythology around those groups certainly is.

"The View From Godzilla Tower" returns with my musings on the connection between THE MYSTERIANS and BATTLE IN OUTER SPACE. Mainly, I discuss how the latter is essentially an unofficial sequel to the former. They even share characters, though this isn't obvious since only Harold S. Conway plays the same part in both films. Finally, I pointed out that "Atsumi" (the name of the hero in THE MYSTERIANS) is hiding inside the name "Katsumiya" (the name of the hero in BATTLE IN OUTER SPACE). Just chance?

Oh. "'Twas The Season!" takes my goal of including more personal stuff to its apex by being a photo essay detailing my doings around Christmas. The captions on the pictures are sort of reminiscent of what you might see on Facebook today. But really, this was probably not something that should have seen print in a fanzine I was sending all over the country. Moving along...

Lewis Smith returns with another installment of "More Truth Than Reality." Sonuvagun, it's a retrospective on the first five years of OWARI from his perspective. He says some nice things about me in this, so I hope I paid him off handsomely. I'm glad OWARI and its sometimes flaky editor made him believe in his own abilities, because he's a talented guy.

I rounded out the issue with the first installment of "I Remember...Earth 2!", which I subtitled "A Column of Comic Book Nostalgia." Yes, even in 2001, I was already looking to the past more than the future when it came to compelling comic book content. My subject was Metal Men #48 (Oct.-Nov. 1976), which was the comic book that ultimately led to my passion for superhero comics and all comics in general. I called it "pivotal," because, "[t]he day I rediscovered METAL MEN #48 was the day I became a comic book fan for life."

I promised the most momentous thing about OWARI #10 is mentioned in the introduction. Here it is:


Yes, it's true. The latest addition to the household is a sparkling new computer. [...] Let me reassure everybody that this doesn't affect my commitment to doing OWARI in its current format.

Despite what I might have said, there wouldn't be another issue of OWARI for over a year.
Posted by C. Elam at 10:07 PM