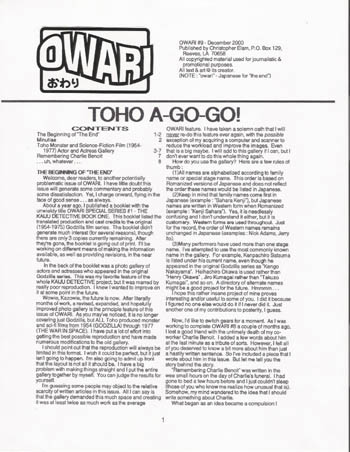 My secret in getting this issue out as quickly as I did was that I was working on OWARI issues #8 and #9 more or less simultaneously during the interim between #7 and #8. Ergo, by the time #8 was ready to roll, a lot of the heavy lifting had been done for this issue, too. It's only "December" because I wanted to give the previous issue some time to get out there (as if!) before coming out with a new one.

All this, and I still went with the most egregiously bad headline I ever used. No accounting for taste, I guess.

After all the jibber-jabber I did in OWARI #8 about writing longer, better articles, even 2000 me realized OWARI #9 was "potentially problematic." My dissatisfaction over the actor/actress gallery in THE KAIJU DETECTIVE proved to be so great that I put together a new one from scratch! This one tried to apply the lessons I had learned from my first attempt's failures, and even expanded the gallery's purview to include all Toho SF films from 1954-1977.

Unfortunately, I don't have much to add to what is essentially a bunch of pictures, albeit still reproduced via photocopier. My introduction does admit that THE KAIJU DETECTIVE didn't catch on, and says the publication will go out of print when all copies are gone. I say there are "only 3 copies currently remaining" as of that writing, so apparently 2 of them found new homes after the fact. That means my little booklet's circulation in its first year was whopping eleven copies. Whee!

Changing pace about as much as possible, I mentioned Charlie Benoit in our last installment. Charlie was a coworker of mine who lost his life in a wreck in 2000. This was a pretty shocking thing for a lot of people to deal with at the time. One way I coped was to write a little thing about him that I gave to my friends. This wound up being read at his funeral, which was...very strange and touching.

Since it meant so much to me, I chose to include this piece in OWARI #9. Due to its highly personal nature, I wonder if this was the best decision. It makes it feel almost like a filler, and I never meant for it to be. However, due to the fact that so few people were reading OWARI, I was starting to do stuff that was more directly aimed at those local folks.

The last page of the issue was the return of Tara DeVeau's column, and this one was actually created by the lady herself (other than my stripping in my intro at the top). This was the first time I had included someone else's layouts in an OWARI since #1. Of course, a typo managed to sneak past everyone, and that made all of us sad.

I almost forgot that there really WAS a filler in OWARI #9, and it was this Godzilla collage I posted a couple of years ago. Everything I remember about it is in that entry.

There's not a lot to say about OWARI #9, as you may have noticed. I don't recall there being much reaction to it in any quarter. It was...another issue of OWARI. I went back to work on my next issue almost immediately, and that one would have a little more content we can discuss.
Posted by C. Elam at 1:11 AM