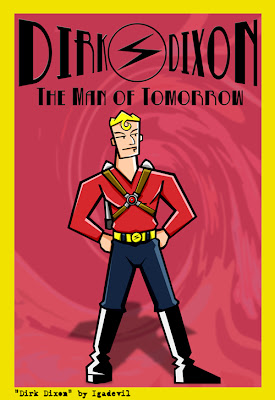 (Artwork by Igadevil, who hopefully will not kill me for resurrecting this 8 year old piece from the archives.)

Dirk Dixon is a bit of a happy accident. He was originally conceived for the GMB/ROJ crossover story that evolved into the "New Return of Jetman" series. When I first had the idea for GMB/ROJ, I was looking to make up a few minor cannon fodder characters, and wanted to parody assorted hero genres not typically associated with either series. Dirk, of course, was a satire on the Buck Rogers/Flash Gordon style of space hero popular in the first half of the 20th century. Since those guys were cardboard in the first place, I had no plans for Dirk beyond a few lines and involvement in a single battle.

As GMB/ROJ evolved into NROJ (which makes me think of NRBQ every time I type it), I searched through the various bits and pieces of already created material, seeing what I could salvage. Dirk was one of the two cannon fodder characters that I decided could be turned into something a little more substantial. Why? Well, it occurred to me that his particular fictional niche is at once both completely divorced from the Japanese superhero genre (due to different cultures and eras of history) and completely in tune with it (the wild absurdity for the sake of an exciting adventure story).

The result turned out to be better than I could've hoped. While I'm proud of all of the work I did on this little project, Dirk turned out to be an inspired concept. By plopping a stereotypical 1930s space hero into a world of Japanese superheroes, I managed to parody the concept a lot more effectively than I could've anticipated. Because Dirk's attitudes, in addition to his trappings, are very much tied into the time period that birthed his type of character.

Dirk is a square-jawed goody goody, as beautifully conceptualized by Igadevil. He's also a racist/xenophobe (take your pick), as evidenced in his first appearance. In later tales, he was revealed to be a sexist, which should come as a surprise to no one. He's largely clueless to his surroundings, and is doggedly convinced that he is RIGHT.

And yet...there's something about him that still doesn't quite come across as sinister. He's a buffoon who plays his part completely straight, and there's something almost charming about that. I can't say Dirk is a character I'd want to hang out with if he were real, but he's a lot of fun to write. As the story took shape, his role expanded and became bigger than I'd first imagined. It also went in a direction I had never anticipated. Of the characters I've personally created for the ROJ stories, he's probably my favorite.
Posted by C. Elam at 10:05 PM

Email ThisBlogThis!Share to TwitterShare to FacebookShare to Pinterest
Labels: return of jetman, works