My Favorite Comic Book Of 2008

I know absolutely no one is dying of suspense over my "favorite comic of 2008" choice. Still, I will tell you anyway. 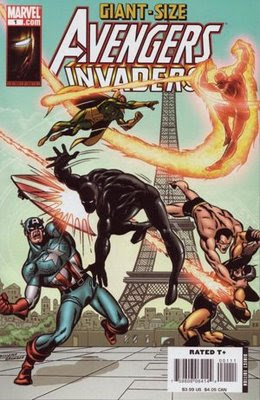 I am sure anyone who cares is probably shaking their head. I like this comic book for a lot of reasons, not all of them directly related to the content. I like that too, but the whole package is what endears this book to me.

It's weird, though - I am a knee-jerk DC Comics fan from way back. And in fairness, I did enjoy some stuff from DC in 2008. However, my tastes and DC's publishing plans both have been drifting in odd directions. So while I certainly enjoyed Ambush Bug : Year None, I am not prepared to throw a party for that series and declare it my favorite book of 2008. That's partly because I had some problems with it, and partly because the final issue is running ridiculously late.

On the other hand, Giant-Size Avengers/Invaders #1 tickles me exactly the way it is. The first thing I love about this book is that it is the gratuitous reprint tie-in comic. It was created largely as an extra "product" for people interested in Marvel's Avengers/Invaders mini-series. It even has a few pages in the back previewing that comic. But they are without dialogue, so you can just look at them or even ignore them if you choose. They won't pull you into the "big" story unless you're already on-board for it.

The second thing I love about this book is that it reprints comic stories I already love, though it is almost random in places. Avengers #71 and Invaders Annual #1 are both obvious choices if you've read them. I presume the tale from Giant-Size Invaders #2 (by Roy Thomas & Lee Weeks) snuck in because it was a recent story with the Invaders. Can I also say how awesome it is that this book thereby flaunts the old "seven year rule" by doing this? I know that rule is largely antiquated anyway in this day and age, but this comic book reprints a story from another comic that is LESS THAN THREE YEARS OLD. I'm not even being sarcastic when I say this makes me laugh. The final story included is from Invaders #10 and its inclusion is so random that I can barely hazard a guess. Maybe they wanted to "preview" Invaders Classic Vol. 2 and this was the best they could do without filling the whole comic?

My thoughts on these stories :

I also like that this is a comic I could buy and enjoy and not have to worry about any other comics. I mean, it technically is a tie-in to a big mini-series, but none of the stories expressly point you to it. It's a self-contained book. That's rare in this day and age.

Lastly, I like this book because of how I got it. My store had sold out of it, and I found a copy of it while I was visiting my good friend Sara Denny this past May. So it is wrapped up with some special memories, too.