The Origin of Storms 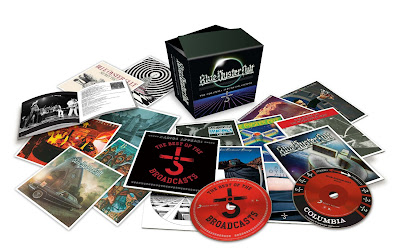 Recently, I have been fortunate to make the acquaintance of a trio of ladies on Twitter. I've already mentioned Sydney here, but her friends Alexis and Katie have also entered my orbit. All three of them are very nice, but I won't even pretend that I know them well enough to tell you much about them. However, one thing I can say with little fear of contradiction is that all of them take their music very seriously.

What you see here is the Blue Öyster Cult box set. It is seventeen discs and signals my ultimate descent into BOC geekdom. I ordered it last night after much foot-dragging, and figure I will be light on human contact while I'm enjoying it. While Syd, Lexi, and Katie are all undoubtedly very serious about their favorite bands (most of whom I don't know - yet), I'm not sure they are THIS serious. But then, that is probably a sign they are saner than I am.

But still, this is the sort of thing that's only possible when both you and your favorite band have been around for awhile. Which is why it's so funny that I can trace one friendship directly to BOC, and it's a person who was born well after "(Don't Fear) The Reaper" first appeared on record and radio. That would be Kabuki Katze, and I'm not sure I've ever told that story here.

2004 began as a very bad year. I won't go into the details, but I was very unhappy and worried about my immediate future. Those issues all ended up resolving themselves for the best. I tend to think one contributing factor that lifted me out of my general malaise was a complicated and convoluted chain of "follow the links" that finally led me one day to Kabuki's LiveJournal.

Understand, I had no intention of ever actually TALKING to Kabu. I just thought she was cool and interesting and a good read. I'm not sure I ever WOULD have talked to her had I realized she was only 17 at the time! Gimme a break, she was already in college - it was an easy assumption to make that she was at least 18! (And she would be a couple of weeks after we "met.")

No, I would likely never have emerged from my lurking had it not been for a strange twist of fate. Shortly after my arrival, Kabu just happened to introduce a custom LJ-theme based on what turned out to be not only my favorite BOC song, but hers as well.

I cannot stress to you enough how profound this was for me. Not only was Kabu a fellow BOC fan, but she loved them enough to code her journal around the lyrics to "Astronomy" and do a piece of artwork based on the song. I have that art in my files, but it's so unlike her current style that I'm not going to include it here. It has sentimental value for the two of us, but I'm not sure it's something that's going to be back on the Internet anytime soon.

I decided that I should bite the bullet and introduce myself to Kabuki. After all, not only was she cool and interesting and a good read, but we had something unusual in common. That turned out to be one of the best decisions I ever made. How could I have realized this random person I found through a series of random decisions would become my ally, my collaborator, and most importantly, one of my best friends? I just wanted to talk to someone. BOC was the icebreaker.

If you ever doubt the power of music, well, there you go. I love Blue Öyster Cult's music, but I love what they brought to my life even more.
Posted by C. Elam at 11:32 PM