This is a tiny bit of a cheat. You see, I've owned INVADERS FROM SPACE on both VHS and DVD for yeeeeeears. I've even seen one half (I'll explain) of the Japanese version. Still, it came in one of my packs, so I took the opportunity to revisit it.

I'd like to officially go on record here as saying I freakin' love the Starman film series! They are not only action-packed, but quite stylish and occasionally creepy. They're also absurd as all get out, but that's part of their inherent charm. You're not really watching anything close to reality when you watch a Starman movie.

They're also a trifle incoherent, but this is not entirely the fault of the original material. The Japanese films were shorter featurettes edited together for American consumption. INVADERS FROM SPACE takes two separate but connected movies and joins them into a whole. It also loses a little subtext in converting Kappa Seijin into Salamander Men, and honestly, it sounds like the dubbing script was just made up on the fly without any thought to internal consistency.

No matter. INVADERS FROM SPACE is a rollicking good time. I enjoyed myself so much that I had to take a screenshot of this moment near the end of Starman about to kick some Salamander Man ass. 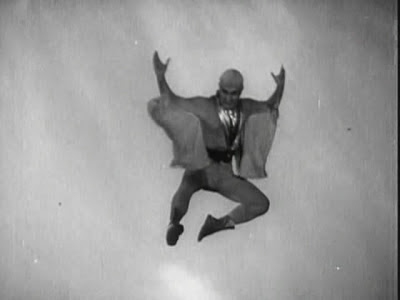