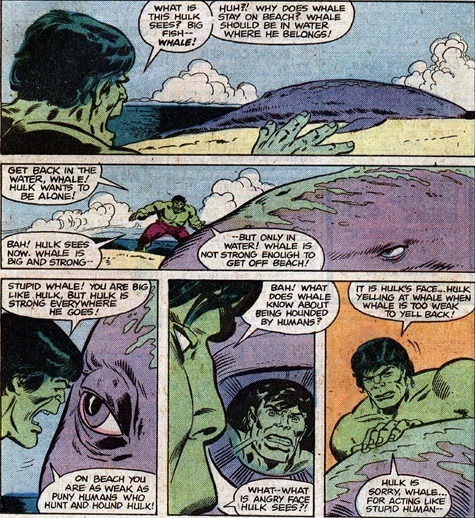 (You should probably make this one larger to read it.)

I saw this panel from The Defenders #75 (September 1979) in Back Issue #70 recently, and it really struck a chord with me. It's an unusually sensitive and progressive way to get across the Hulk's then-childlike intellect. I am especially taken by the concept of the Hulk seeing his own reflection in the whale's eye. It borders on the profound. Kudos to Ed Hannigan, Herb Trimpe, and Mike Esposito here.

To answer your question, the whale is saved. Because he turns up in a later issue!

(Image borrowed with a tip of the cap from SuperMegaMonkey.)
Posted by C. Elam at 12:17 AM