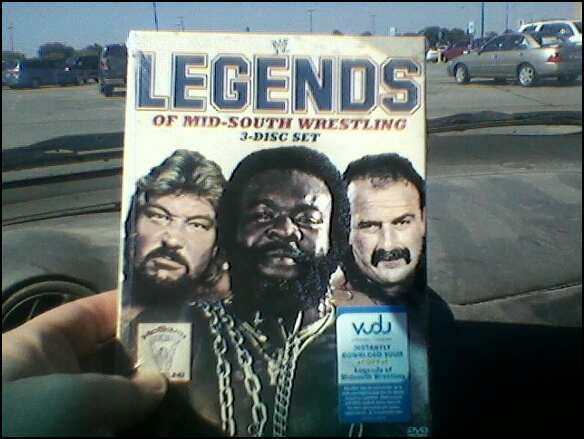 I grew up watching Mid-South Wrestling. I don't remember when that started - I want to say I was maybe 8 or 9 years old. All I know is what is now widely-regarded as one of the best regional wrestling territories captured my imagination as a child.

I guess you could say that's not surprising. As deeply in love with comic books and superheroes as I was, Mid-South Wrestling offered the same sort of colorful characters and compelling action in a "real" setting. I'm not sure when I decided/figured out the action was staged (not fake), but it didn't really affect my enjoyment.

If anyone asks, I will freely admit that the Junkyard Dog was my boyhood hero. That might be hard to grasp for people who didn't see him in Mid-South, but trust me, that guy was electric when he was right. JYD isn't the only one who made fond memories back in those days - my mind's eye can still conjure up visions of Mr. Olympia, Butch Reed, Ted DiBiase, Hacksaw Duggan, Jake "The Snake" Roberts and a cavalcade of others.

WWE recently acquired the Mid-South Wrestling/UWF tape library, and issued LEGENDS OF MID-SOUTH WRESTLING on DVD and Blu-Ray. I happily purchased it, even though my interest in grappling has waned over the years. As I sat and watched it, and re-experienced the old days, I could remember what it was like to be a kid in the early 1980s when all of this was very important to me.

Below is a trailer for this release on the WWE's UK division Youtube channel.