The Art of Ramona Fradon: A Review

Since I wrote about this book (and that entry gets a lot more hits than I would have expected), I suppose it's only fair that I talk a bit about it now that it's out.

THE ART OF RAMONA FRADON finally came out in February 2014. No one seems to have an explanation as to why, though I have a guess (see below). Meantime, Dynamite continues to not engender confidence via the omission of Bob Greenberger (the man responsible for assembling this book) from the Amazon listing. Considering my opinion of the book itself, I wish I could be more positive about the publisher.

Quite simply, I love this book. It is a wonderful showcase for Fradon's distinctive artwork, from Aquaman to Metamorpho to Super Friends to Brenda Starr, and all points in-between and beyond. The interview with Ramona by Howard Chaykin sheds considerable light on her as an artist and a person. It's not necessarily what fans might want, but truth can be hard to swallow at times from someone who crafted your childhood.

The packaging is gorgeous, with plenty of samples of artwork both vintage and new. The checklist is helpful if you want to track her career and note that it's not as extensive as you would imagine. You could probably assemble a good chunk of her published works with less effort than you'd think.

As a fan of Fradon's art from my 1970s exposure to Super Friends and Plastic Man and her amazing run with Bob Haney on Metamorpho, I cherish the opportunity this book provides to study that art and learn more about the artist. It's a shame that any momentum the project had was derailed by an almost two year delay in publication.

Why is that, anyway? Just a guess, but I'm suspecting it had to do with Dynamite getting approvals from the publishers whose properties are included herein. Whether the fault lies with Dynamite or those other publishers, I have no idea. It just reflects pretty badly on Dynamite that a book like this disappeared for so long.

Also, something I noticed in prepping this entry - the cover changed from the originally solicited version. 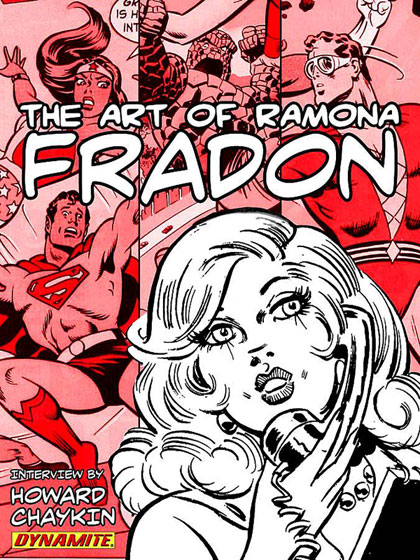 Original solicited cover
There are several differences; some are obvious and some not. One of the more striking aspects is that a certain bashful blue-eyed nephew of Aunt Petunia has gone AWOL from the proceedings. And indeed, no one from his parent company is present on the final cover. Just an observation.
Posted by C. Elam at 11:47 PM