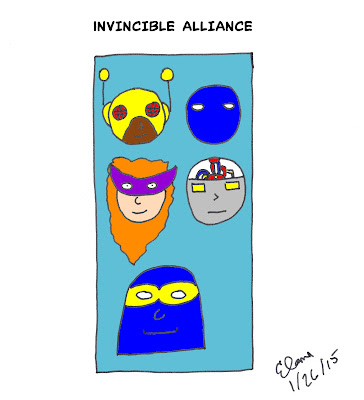 It was the day when it seemed Captain Satellite would surely lose. Third World had launched their most outrageous and potentially devastating attack of all time. A trio of mammoth Macro Warriors landed throughout Major City and threatened to tear the hero's home base apart. Against one or even two of the giant robots, the Captain might have stood a chance. But three? While Captain Satellite and Shelly Ericson unhesitatingly leapt into the fray, they knew their chances of survival, much less winning, were slim.

But just as Third World found strength in numbers, so too did the forces of good. From out of Major City's neighborhood called the Minors came Urban Nightmare. From the campus of Major Technological Institute came Blue Behemoth and Drone Man. From the room at the Majestic Hotel where she was living out of a suitcase on a dwindling expense account for The Sleuth Gazette came Firegirl. And from our nation's capital in Federalton, the government dispatched Ultimate American on his very first mission. Gathered as a united front, these seven heroes defeated the Macro Warriors, and dealt a severe blow to Third World's plans for global domination.

After the dust had settled, a proposal was put forth by Drone Man. Why couldn't the seven of them join together on a full-time basis as a team? His partners Blue Behemoth and Firegirl agreed that they would be on board with such a venture, and Ultimate American allowed that the idea had some merit. The others, however, weren't quite so sure. Captain Satellite endorsed the concept, but cautioned that he was too busy to make any commitments (neatly avoiding the fact that one of his potential teammates would be his ex-girlfriend). Shelly Ericson, on the other hand, flatly declined to be part of what she termed their "glorified pajama party."

And Urban Nightmare? He merely cryptically muttered that he would call them if he ever needed them before slipping away.

Despite a shaky start, the Invincible Alliance was officially formed at this impromptu meeting. A week later, the quartet of heroes who would form its nucleus gathered at the MTI laboratories to hammer out a few formalities. Blue Behemoth and Drone Man passed out signal devices that would permit all of them to communicate securely. Captain Satellite and Urban Nightmare were voted in as honorary members, with signal devices available to them (and Shelly Ericson) if they chose. And finally, Ultimate American was elected leader - much to his dismay. He reluctantly accepted the honor, even though he was the newbie of the bunch.

Although he turned down being part of it, Captain Satellite has been the Invincible Alliance's primary benefactor since its founding. As Paul Mann, he set up the non-profit Invincible Alliance Trust that finances their operations and pays each member a generous salary. He was also instrumental in securing the spacious brownstone in the heart of Major City that serves as Invincible Alliance Headquarters. Cap was even responsible for introducing them to Elektroid, the robot man who would become the fifth name on their roll call when he joined the group.

The development of the Invincible Alliance into a true team has not been without growing pains. There have been numerous conflicts and challenges in trying to get such different personalities to mesh as a unit. The most damaging of these was the revelation that Ultimate American had been under orders to report on the other members. This came out when Ulti became appalled at the situation and forcefully rejected the directive. His comrades were understandably hurt, but also impressed at how he stood up for them - even threatening to resign his alter ego entirely rather than continue as an informant. They believed his pledge of loyalty to them, but an uneasy pall fell over their relationship with the government.

Enter Tex Truman. Ultimate American's father had stepped in to work out a compromise in the schism between Ulti and his superiors (the hero was honorably discharged and permitted to retain his masked identity as his own), and was therefore the logical choice to rebuild trust between the IA and the feds. He was tapped as C.H.I.E.F. liaison to the team, given his intimate knowledge of both the agency and out-of-the-ordinary adventures. Tex also had a hand in the United Nations granting the Invincible Alliance a unique charter as a global troubleshooting task force. Though he is content to stay in the background, Tex has been a big part of the Invincible Alliance being recognized as a serious endeavor.

The Invincible Alliance is second only to Captain Satellite himself in terms of acclaim for superheroics. They are just as frequently called on for missions as Cap, and may be even more accessible. Individual members are often seen tooling around Major City in Air Cars, specially-adapted hovercraft designed and built for them by Karma Bando's Lightning Cars garage. For longer hauls, they pile into their Zip Jet housed in a hangar owned by Paul Mann. But whatever their mode of transportation, the citizens of the world can rely on the Invincible Alliance to be on the case!
Posted by C. Elam at 11:13 AM