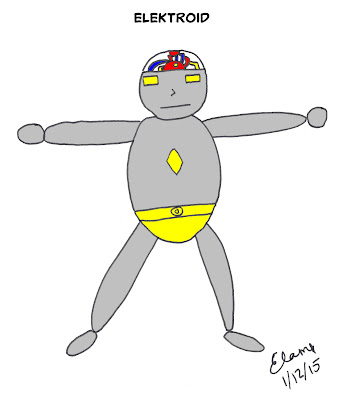 Mad scientist Dr. Sandor Varkoff had the best plan of his life. He had created an electronic android - an “Elektroid” in his terminology - that was powered by its own mini-generator. He would use his Elektroid to disrupt DeKalb Studios in retribution for their refusal to pay him off, and then demand an even more sizable sum of money to prevent further such incidents. Yes, this was his best plan ever. We told you he was "mad," didn't we?

Unfortunately for Dr. Varkoff, his plan hit a series of snags:

Elektroid joined forces with Captain Satellite and Shelly Ericson to capture Sandor Varkoff. In the aftermath, everyone quickly realized there was a problem. Elektroid had developed free will, faulty artificial brain and all, but he had nowhere to go now that he had rebelled against his creator.

Captain Satellite's solution was to introduce Elektroid to the Invincible Alliance and recommend the robot replace him in the roster spot he had never found time to fill. Although Blue Behemoth grumbled a little that Cap was using the IA to babysit the mechanical man, the entire group welcomed the addition to their ranks with open arms. Someone like Elektroid could be a valuable asset to their team.

The Invincible Alliance's confidence in Elektroid has been well-placed. He has served with honor, and his talents have come in handy many times. For starters, Elektroid is the only IA member who is bulletproof. In fact, his alloyed body is nigh-invulnerable against most conventional weapons, and many unconventional ones, too. That's an absolute boon in his current line of work.

Of course, Elektroid's inherent indestructibility isn't his only power. He is also exceptionally strong, though not particularly fast. And then, there's the ability that earned him the nickname "The Robot With The Exploding Brain!" from the sensationalist press. Elektroid tries to be judicious in his deployment of what amounts to lightning bolts shooting from his head. It's an effective offensive maneuver, but also a potentially dangerous one for everyone in the vicinity.

Gradually, the public has come to accept Elektroid due to his association with the respected Alliance. He resides and recharges his mini-generator at Invincible Alliance headquarters, and rarely ventures out unless he's on a mission. The exception is when Kimber Rachelle insists on taking him for a social call. She has grown attached to the electronic man since their less-than-ideal meeting, and is doing her best to help him fit into society. It remains to be seen if Elektroid will ever truly feel like he belongs in a world never meant for the likes of him.
Posted by C. Elam at 3:05 PM