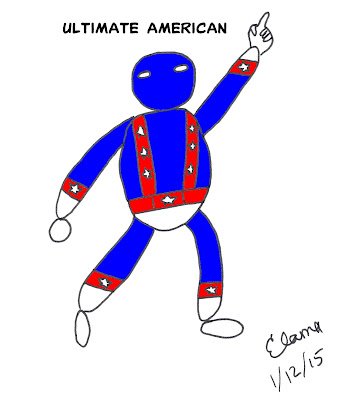 For Dean Truman, being a hero runs in the family. His father Tex is a legendary figure for his exploits with C.H.I.E.F., and was even director of the agency for many years. His mother Gabrielle was also a C.H.I.E.F. agent of great renown. His brother Joe (from his father's first marriage) battled evil for years as a freelancer. So when he found himself in our nation's capital of Federalton training to be the United States government's official superhero, it felt almost like it was inevitable.

Dean Truman joined the Army out of high school, and proudly served his country as a soldier. Like the rest of the world, he was amazed by the emergence of Captain Satellite and the other heroes who followed in his footsteps. Little did he know that his life would soon intertwine with these larger-than-life figures. He was selected by the top secret Monarch-12 committee as the ideal candidate in the military for the role of Ultimate American, the Faceless Defender of Democracy. Presumably, Dean's bloodline played at least some factor in that decision.

It came to pass that Sgt. Dean Truman was completing his crash course in being a superhero when Third World unleashed the Macro Warriors on Major City. Seeing this emergency both as urgent and opportune, his handlers sent Ultimate American to assist in the battle against the giant robots. Their confidence in their charge paid off, and Ultimate American played a key part in that day's victory. What no one could have foreseen was said victory leading to the formation of a super team - with Ultimate American in charge.

Ultimate American was alarmed to be named leader of this new "Invincible Alliance" considering he was brand-new at the job. However, the mantle of leadership suited him well, and he came to think of his fellow members in the IA like platoon buddies. This was why he chafed when his government bosses sent him orders to file reports on the activities of his teammates. But to disobey seemed unthinkable.

Finally, the situation became intolerable, and Ultimate American made an ultimatum - no more stooging on his friends or he would resign entirely from his costumed identity. Tex Truman interceded on his son's behalf and pulled strings to resolve matters without a messy public controversy. Dean Truman was granted an honorable discharge and allowed to retain full control of the Ultimate American guise. In return, the Invincible Alliance accepted a C.H.I.E.F. liaison, and to the surprise of no one, Tex was appointed.

Today, Ultimate American is a full-fledged civilian guiding the affairs of the Invincible Alliance and trying to keep them on a steady course. Despite lacking powers or gimmicks (other than training, conditioning, and a good right cross), there is never a question of who's in command. He attempted maintaining a secret identity early in his career, but it was completely blown by the time he almost quit. He makes no bones about who he really is now. After all, it's hard to pretend you're not related to your dad when he shows up for a meeting.

Away from the action, Ultimate American is very private, and shares little of his personal life despite residing at Invincible Alliance headquarters. His friends believe he is driven to prove he is worthy of the legacy of heroism he has inherited. It is also obvious he is haunted by the disappearance of Joe Truman, the half-brother he never knew.
Posted by C. Elam at 2:59 PM