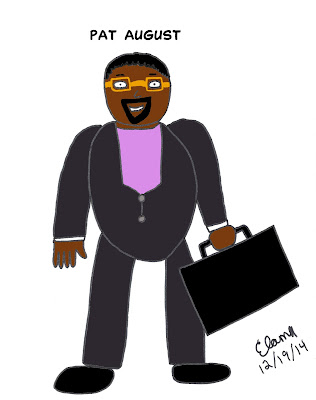 Fresh out of Major City University with an MBA, Pat August was on the hunt for a job. Unfortunately, he wasn't getting a lot of interest - for whatever reason. On a whim, he answered an ad from an unknown and unproven start-up company just to be able to say he got an interview. He had no way of knowing the decision to talk to Paul Mann that day would change his life.

Pat August is the president of Mann Creations, and the one who runs the day-to-day operations. Though Paul Mann founded the company, and is the principal owner and CEO, it is Pat who keeps it humming along. In fact, Pat has became such a valuable and integral part of Mann Creations that Mann felt it only right to bring him on as managing partner, too. As a result, Pat August has became a very wealthy man in his own right - something he is still trying to reconcile to himself.

Pat August is very loyal to Paul Mann as a result of the trust Mann has placed in him, and the two are close friends in spite of their differing personalities. Pat is much more reserved and grounded, and tends to get exasperated at Paul's penchant for gallivanting off on adventures. He supports the good works Paul does as Captain Satellite, but sometimes wishes his friend was a bit more focused on business.

In addition to his duties for Mann Creations, Pat has also become deeply involved in a number of worthy causes. He participates in community programs throughout Major City and the surrounding area, and serves as chairman for the Major City Council on African-American Affairs (MCCAA). In his own way, he is just as much a hero as his best friend - he just doesn't wear a fancy costume.
Posted by C. Elam at 2:34 PM