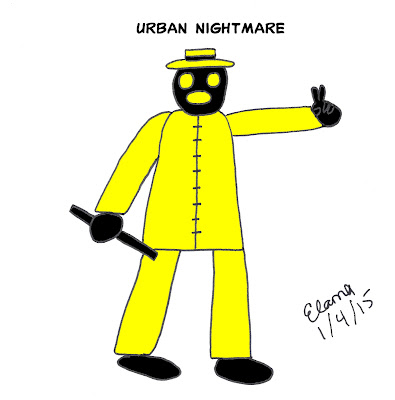 The story of Urban Nightmare truly begins many years ago, in the expansive Major City neighborhood referred to as "The Minors" by locals. It was on the streets of the Minors that 12 year old Jim Lawrence and his 10 year old brother Dennis were unwittingly caught in the crossfire of rival gangs. Dennis Lawrence was killed, and Jim's life was irrevocably changed. After that tragedy, Jim Lawrence dedicated himself to both academics and athletics as a means of escaping his dire circumstances.

Jim Lawrence graduated at the top of his class and chose to attend Major City University - but not as Jim Lawrence. He had become fascinated with African culture in high school, and decided his enrollment at MCU marked the beginning of a new chapter in his life. To signify this milestone, he applied to legally change his name on his 18th birthday. In short order, "Jim Lawrence" was a thing of the past, and he was known by the Zulu name Xolani Shabangu.

Xolani Shabangu took full advantage of the athletic scholarship his abilities on the football field had earned him. He was a regular on the Dean's List as well as the All-American List even while he led the Major City University Purples to four excellent seasons as their star running back. It was a foregone conclusion he would be drafted for professional football after he completed his studies in social work, and he was picked in the first round by the Alabama Vulcans. However, a knee injury derailed his playing career after only five years, and he hung up his cleats with no regrets. He had invested his money wisely, and he wanted to return to his old neighborhood to try to make a difference.

Not everyone in the Minors greeted the establishment of the Xolani Shabangu Foundation with open arms. One night after a community outreach meeting, drive-by shooters fired on innocent bystanders, killing four - including a 10 year old boy. The gunmen had intended to send Shabangu a message, but all they did was enrage him. On that night, Urban Nightmare was born.

Xolani Shabangu assumed the secret identity of Urban Nightmare to patrol the Minors and the rest of Major City. He was inspired by Captain Satellite's example, but chose to emphasize a smaller-scale and more personalized brand of justice. He has immense respect for what Cap does, but he has a completely different mission. Urban Nightmare is a superhero for the little guy, dedicated to keeping the streets safe.

Urban Nightmare has no super powers or fancy gimmicks, instead relying on his own physical and mental abilities. He has, however, been known to brandish what he refers to as his "Learning Stick" to even the odds in his favor. Urban Nightmare also has a reliable and trustworthy informant in "Handsome" Jack Barker, a flamboyant hustler based in the Minors who seems to know nearly everything that is going on at any given moment.

Urban Nightmare shuns publicity, and appears in the limelight with great reluctance. His most famous adventure was his part in combating the Macro Warrior invasion of Major City that resulted in the founding of the Invincible Alliance. He only operates with the Alliance when it suits him - in other words, rarely. He has never been an official member of the group, but he does have an IA signal device should he ever need to get in touch with them.

Urban Nightmare knows crime will never go away, but takes solace in the fact that now the criminals look over their shoulders, too. No one who has encountered him has ever forgotten meeting "A Nightmare Made Flesh." Urban Nightmare is respected and feared throughout Major City as an effective and enigmatic force of justice.
Posted by C. Elam at 2:30 PM