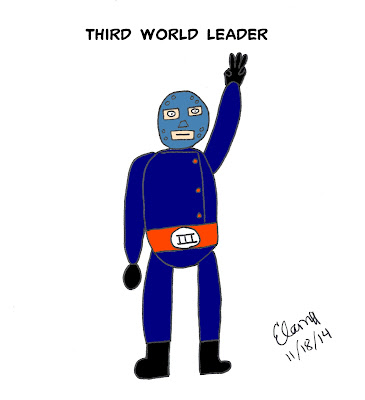 If the rumors are true, the man who would become the first Third World Leader was a frail, low-level lackey in Germany's Third Reich. Seeing the handwriting on the wall earlier than most, he made himself "disappear" and quietly began building his own organization dedicated to world domination. He donned the iron mask that has come to symbolize Third World Leader to conceal his face from both his enemies and his confederates as he rose to power. The whole story has the ring of truth, except that it displays a foresight the latter-day incarnations of Third World have traditionally lacked.

Nobody has ever learned the real identity of the original Third World Leader. For all anyone knows, the current one might be the original rather than a successor. Stranger stuff has happened when it comes to such underground movements. There have been a host of confirmed imposters over the years, so there is no way to be certain who holds the “legitimate” claim to the title at any moment. The rank of leader in a subversive group is fluid and not exactly exclusive.

Whoever he is, Third World Leader is the guiding hand behind that nefarious network Third World. Nothing that comes from the main branch happens without his direct orders. As to the question of whether this is a good thing or not for Third World, well, that is a hotly-debated topic in some quarters. Let's just point out that they still haven't established that dictatorship yet.
Posted by C. Elam at 2:19 PM