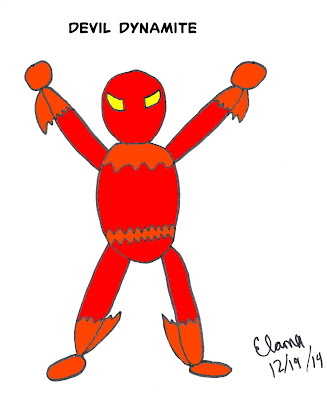 Harrison Otto (“H.O.”) Godfrey is a former Third World agent who decided to strike out on his own. Stealing a prototype copy of Captain Satellite’s powersuit from a Third World laboratory, he christened himself “Devil Dynamite” and launched a noted career of villainy. Due to his origin as Devil Dynamite, H.O. Godfrey holds the distinction of being a rival of both Captain Satellite and Third World.

Devil Dynamite styles himself as the Captain's “evil opposite.” His more outlandish claim is that he is actually Captain Satellite's counterpart from a parallel universe. This particular yarn is his attempt to conceal his true identity, and play mind games with the hero. It is effective enough that Cap has gone so far as to quiz Thunder Man (an actual native of a parallel Earth) as to whether Devil Dynamite hails from his world.

The one saving grace for everyone is that Devil Dynamite’s ambition outstrips his effectiveness. The prototype powersuit he wears is notoriously unreliable and prone to malfunction. This leaves him perpetually in danger of dropping like a stone in mid-flight, which would make a more prudent thinker reluctant to take to the sky.

Devil Dynamite has thus far been unsuccessful in his efforts to rally his own paramilitary force dubbed the “Anti-Satellite League” (ASL). His powersuit currently on the fritz, he has recently been reported as making his living in the wrestling rings of Mexico as the masked luchador Diablo Dinamita. He makes no bones about the fact that he is plotting an elaborate comeback scheme.
Posted by C. Elam at 2:27 PM