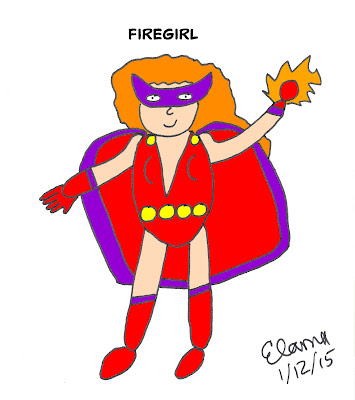 Fiery newspaper reporter Roxanne Prize of The Major City Courier was not only one of the first people befriended by Paul Mann when he arrived in Major City, but she soon became his girlfriend as well. Outwardly, they seemed the very picture of a happy couple, but both of them were keeping secrets. Roxanne's secret was that she was trying to dig up clues to the mystery of Paul Mann's background.

Although Roxanne had initially become involved with Mann to learn more about him, she grew to genuinely love him. That made it a gut-wrenching decision when her research was finally completed and she had reached her conclusions. Should she release the story, or should she just forget it? In the end, her (somewhat unethical) journalist side won out over her personal side.

When Roxanne's exposé on Paul Mann broke, it drove a wedge between the two of them that was impossible to overcome. To make matters worse, it soon became clear to everyone that Roxanne's reasoned deduction of Mann's “true” identity was, in fact, wrong. Having lost both the man she loved and her already iffy journalistic credibility due to her deception, Roxanne more or less went into hiding. She resigned from The Courier, retreated to El Oceano on the west coast, and began writing for celebrity gossip magazines under a pen name.

When Paul Mann created his Captain Satellite persona, Roxanne Prize saw an opportunity to make amends for what she had done. Flying to the east coast on “special assignment” for one of her client publications The Sleuth Gazette, she turned up on the MTI campus ostensibly to interview Mortimer (Blue Behemoth) Kane and Danny (Drone Man) Graham about their recent exploits. But she had an ulterior motive - she pleaded with the two newly-minted heroes to make her a superheroine.

After considerable convincing and arm-twisting, the nonplussed pair relented and pooled their resources to help Prize develop her own super identity. The result of their efforts was the flame-discharging gun the Pyro Pistol. With this weapon in hand, Roxanne fashioned her own flashy heroine costume. A week later, Blue Behemoth and Drone Man had a new partner in their crusade when Firegirl made her debut.

Firegirl has sought to use her return to the limelight to redeem herself for her past transgressions, and perhaps make the world a better place in the bargain. She is known far and wide as a strong woman who is ingenious, courageous, and more than a little flirtatious. She even has her own super powers now, as an especially bizarre case gave her mastery over fire and rendered the Pyro Pistol superfluous. Firegirl is a founding member of the Invincible Alliance, and has distinguished herself time and again.

Captain Satellite and Firegirl appear to have finally made peace with each other over their relationship and the betrayal that ended it. Though Firegirl still has lingering guilt over how it all went down, Cap is perfectly content to let bygones be bygones after so much time. Shelly Ericson, on the other hand, is still not sure she feels so forgiving about the matter.

Firegirl is currently based out of Invincible Alliance headquarters. Being a superheroine is now her full-time job, though she still takes freelance writing gigs. She seems oblivious to the crush teammate Blue Behemoth harbors for her. Will the blue-furred beast with the mind (and heart) of a man be able to confess his true feelings to her someday?
Posted by C. Elam at 2:55 PM