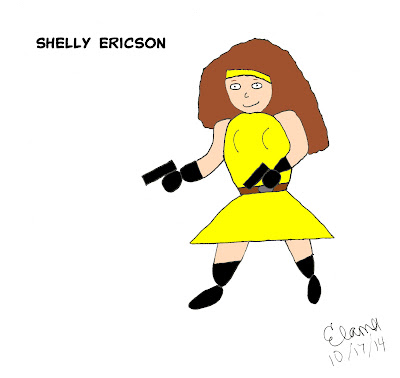 Can a small town girl from Boonland, Texas make it in the big city? That was the question paramount in Shelly Ericson's mind when she arrived in Major City. Freshly discharged from the Air Force, she was looking for some direction in her life. That direction would ultimately find her, but in a most unexpected way.

Shelly was a student at Major City University when she decided to attend a speaking engagement featuring Paul Mann. Also in attendance that day was an undercover agent of Third World looking to take advantage of what he perceived as a golden opportunity. The enemy operative fired his laser pistol as he announced his presence, narrowly missing Mann. Thinking quickly, Shelly cut the Third World agent off as he stormed the stage and disarmed him with her superior fighting technique.

After that incident, Paul Mann offered Shelly what seemed to be a too-good-to-be-true job. She was hired to be his “assistant” - in reality, his bodyguard. Along the way, she would give him pointers on developing skills to protect himself. So when Mann adopted the identity of Captain Satellite, there was no doubt that Shelly would be fighting right alongside him.

Shelly is brave, intelligent, and more than a little stubborn. Though their relationship was strictly business at first, feelings have developed between Captain Satellite and Shelly, and the two are now a romantic couple. Though they have very different personalities, no one questions their devotion to one another.

In her spare time, Shelly is a collector of both knives and Southwestern jewelry. She also has a keen interest in firearms, and will usually bring at least one into battle with her. Captain Satellite has repeatedly offered to create a powersuit for her as well, but she has declined every time. She prefers to handle situations in a more down-to-Earth fashion.
Posted by C. Elam at 2:11 PM