NOTE : This entry originally appeared, in slightly different form, on June 6, 2006. See below for a little 2009 commentary!

OK, honestly? I was going to make a post last night, but Blogspot thwarted me at every turn and I ultimately surrendered. I suppose in a way it turns out to be good fortune, because Mighty Mike Sterling made a post that demanded my attention. Specifically, he mentions that Grant Morrison's Beard Hunter character from his Doom Patrol run was hired by "The Bearded Gentlemen's Club of Metropolis." This reminded me of a certain story I've been meaning to discuss one day.

Hey, remember that book Showcase Presents : Superman Family Vol. 1? It was in all the papers. That's the book that reprinted the first 22 issues of Jimmy Olsen along with the first Lois Lane tryout issue of Showcase. Well, this story isn't in that book because it's from Jimmy Olsen #23, though it was reprinted in #95 of that same title. That latter issue is my source here, courtesy of a tattered and incomplete copy supplied by pal David McRobie. Enjoy it in good health, my friend.

"Jimmy Olsen, The Bearded Boy" opens with our intrepid Jimmy trying to sneak into the top secret, members-only meeting of the BEARD BAND. He fails, mostly because you must have a beard and his fake one wouldn't convince anyone. As he tosses his phony beard away, a gent offers him a beard tonic that will allow him to grow a real beard rapidly. Even Jimmy is skeptical of this proposal, though he takes a swig anyway. 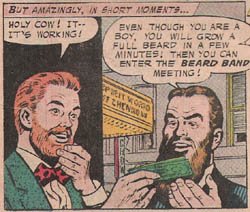 So Jimmy makes his way into the meeting and learns that the BEARD BAND is really hardcore about their beards. Also - SURPRISE! That man on the street is the leader of these bearded boys. And it turns out they have something in mind for Jimmy!

Er, no. They just want more men to grow beards.

Jimmy returns to the Daily Planet and tells his wild story to Perry White and Clark Kent. They laugh it off, both of them drinking the tonic in the process despite the clear evidence that Jimmy's beard is getting pretty long. They aren't laughing when Perry starts growing a beard immediately too. This causes problems for Clark (who is secretly Superman) since the tonic can't work on his super-charged follicles. He solves this dilemma by making a fake beard from his suit. 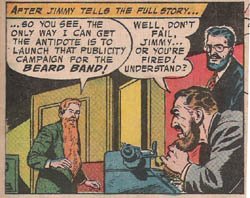 Jimmy makes the public appearances as instructed, and manages to botch every single one of them in that special Olsen way that we all know and love. Interestingly, he loses a big portion of his beard each time, but it grows back relatively quickly. I can't decide if this is so they didn't have to explain how he could get around with a forty foot beard or if it was to highlight Jimmy's complete and utter ineptitude. Either one makes sense, if you can use that phrase in relation to this story at all.

Naturally, the BEARD BAND is unhappy with Jimmy's results.

I'd string you along about the true nature of the BEARD BAND's ominous-sounding masterplan, but really, I don't think even your best guess could top this for being the most mundane diabolical scheme ever.

Jimmy's "idea" is to throw one of his old shaves at the burner and hope it ignites. He misses and it drops in the vat, so he's pretty much screwed up his only chance. The BEARD BAND tests their new tonic (because they're all CRAZY WHACK FUNKY for beards) and... 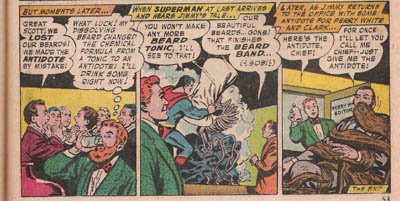 Wow. I'd love to analyze this, but it almost feels wrong to try. I'm guessing the BEARD BAND avoided jail time, since "forcing people to grow beards" isn't a criminal offense as far as I know. Also, maybe I'm speaking out of turn, but why must this be "the end" of the BEARD BAND? Yes, their beards are gone, but surely they'll grow back. I mean, their antidote can't permanently inhibit facial hair, right? I'm thinking too much, aren't I?

This is what you have waiting for you when the inevitable Showcase Presents : Superman Family Vol. 2 comes down the pike. I know you're all going to start saving your pennies now.


2009 Commentary : Well, to no one's surprise, Showcase Presents : Superman Family Vol. 2 was indeed published, and this story turned out to be too good to resist for comics blogs besides my own short-lived effort. I am not going to try to figure out who among us wrote the best entry. Heck, that's a fool's errand! But here is a (surely incomplete) list of other bloggers who talked about this peculiar story :

As you might notice if you read a couple of those entries, Grant Morrison's group is written to be exactly the same one as the one from this Jimmy Olsen story. That's the kind of insanity that blows even my mind.
Posted by C. Elam at 8:27 AM