We Rip The Lid Off The True Story!

It's a little known fact, but Famous Comics Blogger® Chris Sims revealed in 2006 that my good friend Kabuki Katze once tried to seduce Superman. 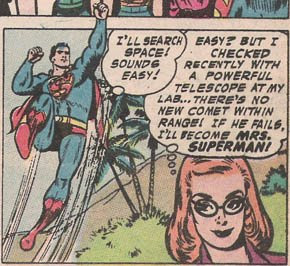 (That second pic is my own scan, by the way.)

Now, never mind that "Dr. Edna Blaine" business, or the fact that the comic was first published well before she was born. I think we can all agree those are mere pesky details.

When contacted, Kabuki said this :

It's true, I admit it! I wasn't a Swedish masseur or a Japanese courtesan in my past life--I was Dr. Edna Blaine and I worked cat-eye glasses and pumps like nobody's business.

She's not lying, as you can see:

I don't know about you, but that makes me want to check out her amazing art site more than ever!