You might recall my wondering if Anne Mari was originally supposed to play "Anne Yuri" in ULTRASEVEN, rather than Yuriko Hishimi. Well, I was recently perusing Yuriko Hishimi's Japanese Wikipedia page (like you do) and came across a stunning fact. It appears that Hishimi was not the first choice to play Anne Yuri after all! The twist is that the other actress wasn't Anne Mari either! 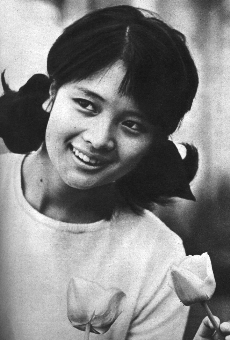 Instead, it was Yoshiko Toyoura (豊浦美子; Toyoura Yoshiko), who is pictured above. It turns out I've seen Toyoura in a movie - namely, this Crazy Cats comedy. That's a nice segue, because the reason she left the role of Anne was to take a part in another Crazy Cats film, KAITO JIBAKO (aka MONSIEUR ZHIVACO). Yuriko Hishimi took over as Anne in her stead, but it seems the uniform had already been made with Toyoura in mind and it didn't quite fit Hishimi properly. Thus, some Japanese writers have pointed out that the fact that it's a bit tight on Yuriko might have played a part in the popularity of her character. I'm sure it didn't hurt.

Of course, none of this answers my question as to whether Anne Mari was Tsuburaya Productions' original choice when they created a character named "Anne Yuri," but it does add a fascinating little wrinkle into the conversation.
Posted by C. Elam at 9:39 PM