Some time ago, I was chatting with David McRobie about comics and he mentioned how cool it would be to own a comic book from the Golden Age. It didn't have to be any specific one, though some were more obviously more interesting to us than others. I agreed with him, but frankly, the thought seemed like a pipe dream to me.

Oh, I've considered it a few times. There have even been a handful of occasions where price and opportunity seemed to intersect enough where I could make it happen. Alas, I always missed my chance. Usually, it was because someone got to the book before I did. I didn't worry that much about it, figuring it was one of those things that was fated to never happen.

Well, I'd like to thank Kevin Cinquemano at Paper Heroes for allowing me to realize a very small dream of mine. For the modest price of $10, he sold me a copy of Famous Funnies #153. It's not in very good shape, and it doesn't feature any characters or artists I usually collect, but it's still a milestone for me. Why? Because it is dated April 1947! 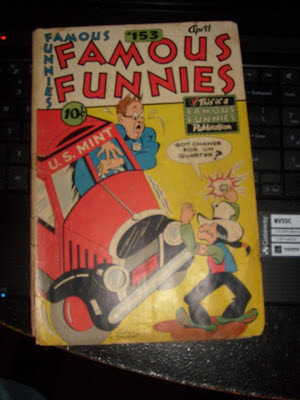 Email ThisBlogThis!Share to TwitterShare to FacebookShare to Pinterest
Labels: comics