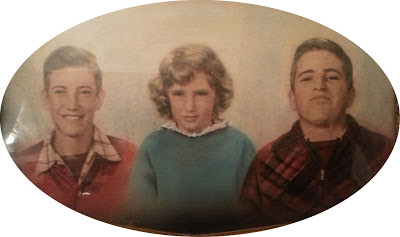 This portrait hangs on a wall in our house. It depicts the three children of Lee and Rhea Elam, or Paw Paw and Maw Maw as I called them.

In the center is the youngest, my Aunt Georgia Beth. She is still going strong, and is probably as full of mischief as ever.

On the right side is Jerry, my father. I think you can tell just from this photo that Dad could be a piece of work sometimes, but we loved that man. We lost Dad in May 1998, and I think of him every day. No man had a bigger impact on my life, and I learned so much from his example.

On the left side is my Uncle Larry, who left us on Christmas Day. It's not my place to eulogize him, but that night I called him "one of the greatest men I've ever known." And really, what more can I say about him if you never had the pleasure of crossing paths with him?
Posted by C. Elam at 5:40 PM

Email ThisBlogThis!Share to TwitterShare to FacebookShare to Pinterest
Labels: life