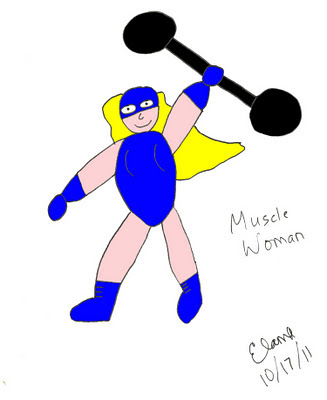 Elisabeth Huerta (“Beth” to her friends) was an excellent student and promising athlete at El Oceano State University when she gave it all up at the age of 19. Why? So she could run off and marry Len Gordon, a man 12 years her senior.

Unfortunately for Beth, throwing caution to the wind didn’t exactly work out for her, and she wound up being another divorce statistic by 21. Attempting to piece her life back together, she enrolled at Magnifica University (unable to face returning to her former college) and set about the business of graduating. She retained the married name of Beth Gordon both out of convenience and as a reminder to not stray from the task at hand again.

What Beth Gordon could never have anticipated was being kidnapped by Third World agents and subjected to a process they hoped would make her a weapon in their quest for world domination. And remarkably, Beth did not die after being dosed with any number of chemical potions and bombarded by several different unknown rays. Instead, she found that she had gained fantastic strength far greater than possible by normal means.

Third World’s brainwashing techniques were just as efficient as usual (i.e., not very), and Beth soon broke free from her captors with her super strength. Determined not to let them get away with their nefariousness, she threw together a costume and single-handedly broke up the Third World branch that had abducted her. During this case, she coined the name “Muscle Woman” for herself.

Muscle Woman has continued to fight crime and injustice and garnered considerable fame in El Oceano. She keeps her alter ego a secret despite the promise of glamour and fortune, desiring mainly to further her education and maintain a low profile as Beth. However, she does hope to one day meet the superheroes of Major City and work with them to crush Third World once and for all.


Muscle Woman was created in the late 1970s/early 1980s as a female partner for a character named Muscle Man. I am sure I drew inspiration from the likes of Hawkgirl and Bulletgirl in this artistic decision, but the reason I chose Muscle Man for a distaff counterpart is a mystery to me today.

Anyway, I never did much with Muscle Woman even at the time, and she would have been consigned to the limbo of unused characters permanently alongside Muscle Man had it not been for the twin towers of Sara and Kabuki again. Sara, in particular, wanted to use all the superheroines I had ever created, but it took time for me to concoct a backstory that I felt worked. Credit also to Kabuki Katze for her amazing work in updating Muscle Woman's look for a new century.

Speaking of that backstory, there are elements of it that were devised in tandem with Sara back in 2009. This necessitated some creative thinking on my part when I decided to go in a different direction than I had originally envisioned. Specifically, Muscle Woman wasn't always Latina, and I had to then figure out a reason for the "Beth Gordon" name when I decided she should be. This led me to a whole origin story that hadn't been in the cards until I stretched my mind a little. I'm pretty happy with the result.
Posted by C. Elam at 11:21 PM