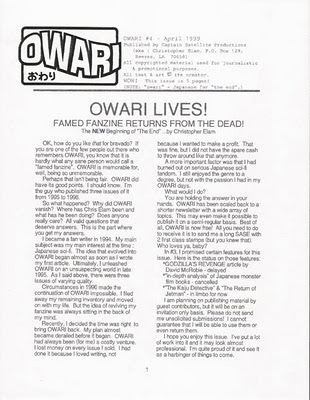 Time has a funny way of playing tricks on our memory. Before I actually sat down to examine OWARI #4 for the first time in awhile, I had no recollection that I had been entertaining thoughts of reviving my fanzine prior to taking the plunge with it. Digging a little deeper, I think I can connect the dots and follow my thought process at the time. But that is something of a continuing subplot that will be finding its way into these reviews (he said ominously).

So it seems the thought HAD occurred to bring OWARI back, despite having declared it finished at some point in 1998. Then I remembered what a pain it had been to produce and ship the 'zine, and that killed the idea. Or did it? I distinctly recall being on campus of my old school to pick up my sister and letting my mind idly wander while I waited on her for some reason. As it did, I thought about OWARI and remembered how August Ragone and company's Henshin! had been distributed as a free newsletter. That meant plenty of publicity for the eventual launch of their full-scale magazine (which never happened, but that's a story I don't know).

That was when the thunderbolt of inspiration struck. Why not revive OWARI...as a free newsletter? It had never made any profit, so the goal was mainly to get it out there to the public. With this resolve, I was reinvigorated, and decided the time was right for OWARI to return. I set forth my goal of having it ready for April 1999 by dating it as such at the outset (it was still March) and began my work.

Astonishingly, it took a grand total of ONE WEEK to go from initial idea to finished product. I was never that fast either before or after this issue, but I was inspired and it drove me. The end result is the one time I can say I was truly satisfied with an issue. And it came out a month early!

I opened with the editorial seen on the front of the newsletter above. Yeah, covers were gone in this format switch. I was working on a word processor rather than a typewriter, and that freedom allowed me to experiment. It was far from perfect, but it looked much smoother than the results I'd previously been able to achieve. I explained a little of the whys of OWARI's disappearance and return, and even came clean on that little fiasco in #3. However, I would like to assure you that the sub-headline was solely intended to be tongue-in-cheek.

I opened up the contents proper by reviewing RED DWARF Series 8. Well, more like the first three episodes of Series 8. I'm still not sure the last two series of that show were a good idea, but they have strong points. Next on my list were the two Godzilla CDs issued by GNP/Crescendo, and this write-up recounts a funny story I'd totally forgotten: the trying-to-be-helpful clerk who pointed out to me that they were NOT the soundtrack to the American Godzilla movie. Poor guy, he had no clue why I'd want those instead.

For the first time, I profiled Big Bang Comics, which was still being published by Image in those days. I also alluded to a "manuscript" about BB in this piece, which ties into those pre-revival thoughts and the running subplot. So more on it next time.

Look at that, I talked up a VHS tape on the early career of pro wrestler Jerry "The King" Lawler that I'd unearthed in a now-closed video store. Then I scratched my head over the film BRUCE LEE AGAINST SUPERMEN, which needs to happen again one day. I next promoted my friends in spotlighting both Lewis Smith's now-defunct "House of Hardcore" website and David McRobie's Xenorama fanzine. Finally, I did a humor thing on a Superman statue that is probably going to be recycled one of these days.

I closed things out in this brief 5 page newsletter with an op-ed section I dubbed "Tilting at Windmills with a Toothpick". I had latched onto this name in the preceding two years, but this was the first time it made it into print. And that was a wrap for the long-awaited fourth issue.

With the benefit of hindsight, it's easy to see that this newsletter is sort of a proto-blog. It jumps around with little rhyme or reason, but I like to think that has been one of my trademarks here. It hits on most of the subjects we cover now on a regular basis. In many respects, OWARI #4 is still serving as the blueprint for OWARI as a whole, just like it did when I mailed it out into the world over 12 years ago.

There would be more OWARIs to come, and the fanzine version never again would please me as much as it did right at this moment. But for one week, I was on fire, and there was literally no stopping me from creating and publishing my own fanzine. It was an amazing burst of creativity after wondering if that chapter of my life was closing.
Posted by C. Elam at 7:28 PM