Where Have You Gone, Duke Mitchell? 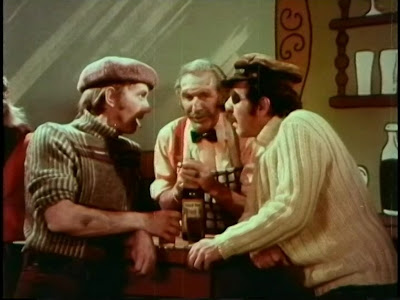 A few months ago, I featured a screenshot from a movie called SEX IN THE COMICS. For a variety of reasons, you probably won't be seeing a review of this film anytime soon. Trust me, you should be grateful.

One point of contention that I saw come up in discussions of this flick was whether one of the masked male performers (don't ask) was Duke Mitchell. It seems a couple of folks thought they recognized his voice beneath the latex. But who, you ask, was Duke Mitchell?


Duke Mitchell is best known, if at all, for co-starring in the film BELA LUGOSI MEETS A BROOKLYN GORILLA. He was the stand-in for Dean Martin to Sammy Petrillo's ersatz Jerry Lewis. He also directed and starred in something called THE EXECUTIONER, which may be even more insane than Duke being turned into a gorilla.

Did you watch the video from THE EXECUTIONER? The older hit man is Duke. You heard his voice, and you saw what he looked like in the 1970s? OK, let's see that picture from the beginning of this entry again.

This is another screenshot from SEX IN THE COMICS, a film from around the same time as THE EXECUTIONER. That bartender is totally Duke Mitchell. I can't post an audio clip for you, but trust me, it's the exact same voice. I think people may overlook Duke's unmasked role in this sketch movie after later seeing him in one of those hideous frightmasks. But, it's him. Of course, his one-time partner Sammy Petrillo appeared in Doris Wishman's KEYHOLES ARE FOR PEEPING, so it's not as if this should be shocking.
Posted by C. Elam at 9:07 PM