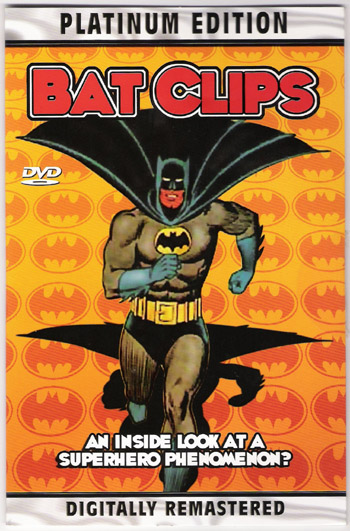 Sometimes, I buy things just so I can write about them.

I was at Walgreen's one day, trying to decide if I wanted another bag of those Thai BBQ corn chips. I decided to go look at their DVDs, because that's how I roll. There was ONE copy of this DVD and I knew as soon as I saw it that one dollar was not too much for this. The blog entry alone would be worth a dollar.

Yes, this DVD is actually called BAT CLIPS. And don't you love how the blurb at the bottom is a question. Is it really an inside look at a superhero phenomenon? No, it's actually a multi-gen bootleg tape transferred to DVD.

No, really. It opens with the Batgirl test pilot, then has the ERA psa from the 1970s. There are trailers for the 1966 Batman movie. There are home movies of an Adam West con appearance and behind the scenes at whatever TV show arranged a "reunion" of much of the surviving cast in the 1980s. It's much of the same stuff I saw on bootleg tape waaaaaay back in the early 1990s.

Unreal. I knew some of these discount companies dealt in weird stuff that was grey area or outright illegal, but...man, this is mind-bending. I'm told this might be derived from a videotape marketed by Simitar at one time. Wouldn't surprise me. I also like the cover, using as it does the stock art DC provided back in the 1970s.

To sum it up, here's the summary from the back of the cardboard sleeve.

Batman has been on top of the Superhero world for 50 years. Movies, TV Shows, Comic Books, Fan Conventions, and much more! Batclips shows you rare footage of commercials, outtakes, promotional reels, posters, public appearances, and more Batmania than has ever been assembled in on DVD before. Batclips is a must for Batman fans of all ages.