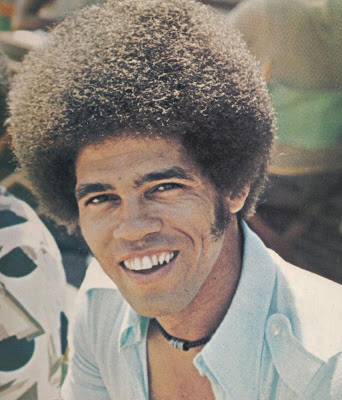 (Photo via August Ragone)
As someone who loves martial arts movies, it was a given that I have known about Jim Kelly for years. No, not the former NFL quarterback; this Jim Kelly was famous first. Jim Kelly was "Williams" in ENTER THE DRAGON, and almost - almost - steals the movie from Bruce Lee. He parlayed that role into a string of starring vehicles like BLACK BELT JONES and TATTOO CONNECTION. They're weren't always very good, but Jim Kelly's star always shone in them. He was something special - able to talk the talk and walk the walk.

Jim Kelly died on Saturday at the too-young age of 67, reportedly from cancer. Not even the "Black Superman of the Martial Arts" could cheat death forever. I will always smile when I think of him smarting off to the bad guys before kicking some ass. Thanks for the memories, Mr. Kelly. May you rest in peace.