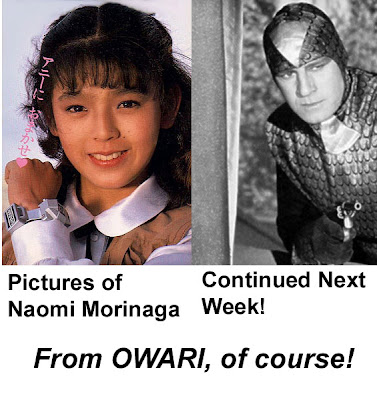 I don't think I ever uploaded this promotional graphic here after I made it in October, so here it is as I promote these two side projects of mine. Details? Oh sure!


Pictures of Naomi Morinaga is an image blog dedicated to the Japanese actress and stuntwoman best known for appearing as “Annie" in the SF superhero TV series Space Sheriff Shaider. However, Morinaga’s career was far more than just Annie, and this blog attempts to cover the full range of her résumé. It even ventures into her forays in nude modeling, and thus is NSFW (though tastefully so).

This blog is one that I would recommend to people interested in Japanese superheroes of any type, super heroines of any nationality, and/or fans of beautiful women.


Continued Next Week! is an image blog run by yours truly dedicated to movie serials. There is a slightly greater emphasis placed on science-fiction and superheroes, as that is the primary direction of my interests. However, I have tried to spotlight all kinds of serials - including silents and non-U.S. chapter plays. I also focus on those performers who appeared in the cliffhangers of yore.

I would recommend this blog to anyone interested in the above subjects or to anyone who would like to see posts on vintage film. Heck, just the aesthetics of these photos might be worth a glance!
Posted by C. Elam at 1:29 AM