The True Identity of Dr. Guardian

I am pretty positive that Igadevil was the one who first uncovered this link. I had lost it, but had sent it several years ago to my pal Ronnie Burton. When I mentioned it to him recently, he found the e-mail in his Inbox and forwarded it back to me. Capital guys, both of 'em.

This all goes back to the TV series JOHNNY SOKKO AND HIS FLYING ROBOT, aka GIANT ROBO. Until the advent of the Power Rangers in the 1990s, this was probably the most famous Toei tokusatsu show in the United States. As a result, it is firmly established alongside ULTRAMAN and THE SPACE GIANTS in the memories of the kids who grew up with it.

(Not for me, though. I never got to see any of them growing up. I think JOHNNY SOKKO is actually my favorite, though ULTRAMAN and THE SPACE GIANTS are fantastic shows.)

One of my enduring mysteries of JOHNNY SOKKO was, "Who is Dr. Guardian?" 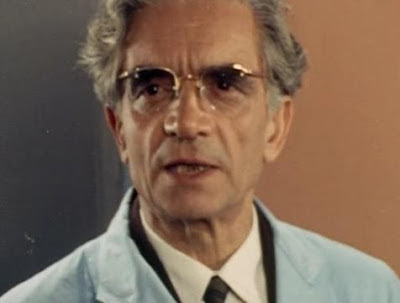 Well, in the context of the show, Dr. Lucius Guardian is the guy who created Giant Robo under duress from the Gargoyle Gang and then gave Johnny the watch that allows him to control the robot. Sure, I know that. The thing that puzzled me was who was the actor playing him? I am more well-versed in gaijin in Japanese movies than the average person and couldn't place him. To my knowledge, I've never seen him in anything else. If he shows up, it's not in any kind of prominent role.

I got a partial answer when I received a DVD that included the Japanese opening credits for the first episode of GIANT ROBO. There was only one foreign name listed, and it was ジャック・オンガン. So that had to be Dr. Guardian.

Except the name itself was a bit...odd. It's phonetically "Jyakku Ongan." The first name seemed to be "Jack," but "Ongan" wasn't ringing any bells for me. I just wound up accepting it since Japanese cinema was filled with performers (many of whom were Turkish) with names that were wholly unfamiliar to me. I am looking at YOU, Osman Yusuf and Enver Altenby.

When Igadevil and I were debating this one night, my recollection is that he's the one who uncovered this list of French surnames and their katakana equivalents. There it was, tucked away as a parenthetical alternate rendering. It seems the usual method for this name is アンギャン, but sometimes オンガン is used instead. But both of them were katakana renderings of the French name ENGHIEN.

There was the answer. It was not "Jack," but rather "Jacques." Both names are written identically in katakana. Dr. Guardian was evidently played by a Frenchman. Whether he has additional roles in Japanese productions is unknown to me. But let the records show that the role of "Dr. Lucius Guardian" in the first episode of JOHNNY SOKKO AND HIS FLYING ROBOT is played by Jacques Enghien. Another minor mystery solved!
Posted by C. Elam at 10:18 PM