I have often stated that my favorite comic book series of all time is the Bronze Age All-Star Comics. It ran from October 1975 (Jan.-Feb. 1976 coverdate) to June 1978 (Sept.-Oct. 1978 coverdate), with an additional year for the Justice Society in the pages of Adventure Comics. Those books, and other associated JSA comics from that era, really shaped my interests in the comics genre as a whole. If I'm being honest, I still feel their influence to this day.

Considering how strongly I feel about this series, I have toyed with the idea of covering each issue in a sort of index. However, given the likelihood of me following through on this project, I've never seen fit to start it. I mean, it took me two years to review my own fanzine, and I'm still procrastinating on finishing the notes for a story completed in 2010. So there's that.

Still, there is one aspect of the 1970s All-Star that I feel I simply must cover. It is something that I don't think anyone else has ever discussed. I don't know if I am onto something, or if my imagination is just being especially vivid in reading between the lines, but when I stumbled upon this idea a couple of years ago, I couldn't let it go. Maybe someone else noticed it before me, but if they did, I missed it.

There is an incredibly minor character in All-Star Comics named Eileen O'Neil. No, not April O'Neil, that's someone different. Eileen O'Neil is introduced in All-Star Comics #60 as Alan (Green Lantern) Scott's secretary at Gotham Broadcasting. She also hints at an interest in him beyond strictly professional (and remember, this was back in the days when Alan Scott was straight). 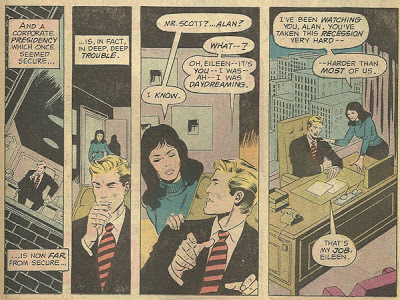 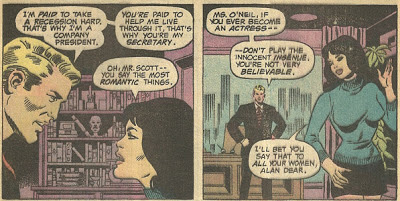 As you may have noticed, she's also a little bit of a sassypants. Not too bad for a character who doesn't even rate being listed as one of the characters in the story by the GCD. I rather enjoyed the interplay between Eileen and Alan.

So what became of Eileen? Well, nothing, as it turns out.


Eileen O'Neil made her next (and final?) appearance in All-Star Comics #64. At least this time, she rates a mention on the GCD. It's not much of an appearance though. I'd rate it as a bit more than a "cameo," but only a little bit more. 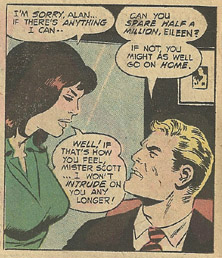 After these terse words from Alan (who is in the process of losing Gotham Broadcasting), Eileen storms out and is never (to my knowledge) seen or heard from again. To better illustrate how minor she was in the overall scheme of things, I have only omitted three panels from the entire body of her appearances in the book. So yes, Eileen O'Neil only chalked up a total of 9 panels in her four color life.

Why write about Eileen O'Neil at all beyond just a few lines, much less devote a whole post to her? Well, this is the Internet, and obviously no trivia is too minute to escape notice. But in all seriousness, the reason is because I suspect there were bigger plans afoot for Eileen than just walk-on roles.

Please witness this panel from All-Star Comics #60. It is from the page immediately prior to Eileen's debut. 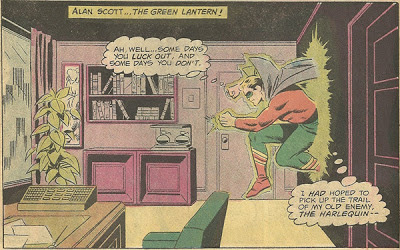 At first blush, there is nothing remarkable about it. The Harlequin was, after all, an old enemy of Green Lantern. Maybe she had supposedly reformed near the end there of the 1940s, but the 1970s All-Star was known to play a little fast and loose with those kind of details. Per Degaton, for example, seemed like a totally different character. Namechecking the Harlequin by itself isn't that strange a thing to see.

What makes this panel strange is that the Harlequin never appeared during the entire Bronze Age run of the title. In fact, as near as I can tell, her first new post-Golden Age story is the one from Superman Family #206 (March-April 1981). That tale is set in the late 1940s/early 1950s and continues the thread of the Harlequin as an FBI agent posing as a crook. It wouldn't be until Infinity Inc. that the Harlequin reappeared in the Modern Era, but that's another story.

It's a real curiosity. Many Golden Age villains were revived in the 1960s and 70s, but not the Harlequin. You could make the case that she was GL's top villain, though Solomon Grundy might have a case. Yet, she didn't get the nod, despite Duela Dent using her name for a time in the pages of Teen Titans. But for some reason, there is this fleeting mention of her in an unrelated story, and then it's never followed up on again.

Let's think outside the box for a minute. Did you read the Harlequin bio I linked? If you did, maybe you noticed something. The Harlequin, or more properly her alter ego of Molly Mayne, was from an Irish family. She was infatuated with Green Lantern. And she worked as a secretary.

Does any of this sound vaguely familiar?

My entirely unprovable theory is that Eileen O'Neil was really intended to be the Harlequin in disguise. This is even more plausible when you consider that the Harlequin's glasses created illusions. It would be no big thing for her to use them to alter her voice and appearance enough that Alan Scott would be none the wiser. Even then, there are hints of something between them. This would be completely consistent with her prior appearances.

If the intention was for Eileen to subsequently be revealed as the Harlequin, this obviously never happened. Gerry Conway left the book as writer/editor, and Paul Levitz went in a different direction as scripter. Eileen was written out rather abruptly and forgotten. If there had been any plans for her, Levitz was either unaware of them or abandoned them. And so, Eileen O'Neil faded further into obscurity.

I call this an "entirely unprovable theory" because I once asked Gerry Conway himself about it and he doesn't remember. And really, why should he? It's been (Good Lord!) almost 40 years since he wrote that story. He's written countless scripts since that time, many of which were much higher profile jobs. I can understand why he wouldn't recall if he included a bit of foreshadowing in a story for a subplot that was never realized.

That's where we stand. I think Eileen O'Neil was meant to be the Harlequin, even if that's not the way it played out. Gerry Conway, the writer and editor of the comic in question, doesn't know anymore. Unless Paul Levitz or Keith Giffen (the penciller of record for All-Star #60) have any insight into the matter, that's as far as we can go. But it sure is fun, isn't it?
Posted by C. Elam at 12:15 AM