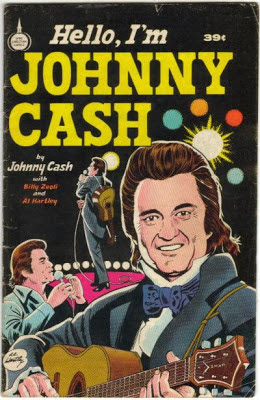 (Full disclosure: This image was nicked from the GCD page because I am too lazy to scan my copy. For the record, I own the 49¢ version.)

I had seen some Spire Christian comics back in the day, but the lack of flashy art and superheroes pummeling one another tempered my interest as a youngster. Obviously, I never encountered this comic recently purchased by pal Casie, but that's beside the point. With the exception of some Barney Bear titles, I didn't really have a lot of experience with Spire.

As an older fella, the one Spire comic I felt like I needed to read was Hello, I'm Johnny Cash. I mean, I love comics, I love Johnny Cash's music - it seemed like a natural. However, what stopped me was my inability to turn up a copy at something less than an insane price. And to be totally honest, I rarely found copies for sale even at insane prices.

Enter Mike Sterling. Besides his duties as America's Favorite Funny Book Blogger, Mike is also Manager and Chief Head Cracker at Ralph's Comic Corner. When he mentioned getting a bunch of Spire comics, I asked about Mr. Cash, and wonder of wonders, the book was in the lot. Not too long at all later, I had my very own copy of Hello, I'm Johnny Cash in my hands. Thanks Mike, you are a credit to mankind!

I realize this is the part of the review where I am supposed to make light of this comic, but in all honesty, I don't have it in me. It's pretty straightforward for the most part. There's Johnny leering suggestively at some anachronistically-drawn dames, and more than a few panels of him popping pills. Is some of it exaggerated? Oh, I'm gonna go out on a limb and say, "Yes." But of course, I don't know for sure. It's ENTIRELY POSSIBLE that a drunk and shirtless Moose Mason (with a perm) attacked Johnny in a jail cell and was lulled to sleep by song.

One of the more puzzling aspects of this comic for me was the name of Billy Zeoli on the cover. It's well-established that Al Hartley did these things himself, so who was Zeoli? GCD seems to think he's the scripter, but I was leaning toward the idea that he did retouching on Johnny Cash to make him look more Johnny Cash-like. Turns out, we were likely both wrong. Billy Zeoli was the head of Gospel Films, which suddenly makes this being Cash's crowning achievement in the narrative a lot more explainable. Zeoli was also credited with working on the Spire Tom Landry comic, and this Sports Illustrated article from 1976 clarifies that connection, too.

In other Zeoli news, he was at one point President Gerald Ford's pastor. I suppose this means we just missed out on a Gerald Ford comic book. Darn it! Anyway, my point is, I don't think Zeoli had any involvement in these comics other than brokering the deal that caused them to exist and maybe having script approval. I doubt we'll ever know for sure.

I'm glad I finally got the chance to read Hello, I'm Johnny Cash. It is a surprisingly decent comic that isn't too preachy in its message and only occasionally detours into outright silliness. Props to Mike Sterling for hooking me up with it. Go read his blog and give him all your money (not necessarily in that order).
Posted by C. Elam at 1:22 AM