It is a testament to how much this blog's mission has changed since its inception that I only got around to re-publishing my Roy Lichtenstein piece on Thursday. When I decided in January 2009 that I wanted to use OWARI to showcase the best entries from my old LJ, that post in particular was one that I had earmarked for early inclusion. Things came up, I began to focus on more original content, and I just never found the right opportunity to include that little essay. It has been sitting in a folder all these years, waiting for its return to the spotlight.

Of course, the entry might have never even made it onto the blog at all were it not for the fact that it was appropriated by the "DECONSTRUCTING ROY LICHTENSTEIN" site. I kept the old Homestead link in the original, but I am pretty sure that Flickr is the contemporary home of that project. If it was going to be out there, reaching a much-wider audience than I'll ever manage, I felt it imperative that I offer my own take here. Well, an updated take anyway.

There are bits and pieces I'd like to fine tune on that entry, but since it was republished in its original form, I left it largely intact. I updated a couple of links and fixed some spelling and formatting issues. Other than that, it's the same piece. And you know what? I feel exactly the same way seven and a half years later.

An interesting footnote that came up on OWARI 2.0 last year is Steve Epting's revelation that Lichtenstein copied his work in the 1990s. I guess the guy couldn't help himself. But seriously, Mr. Lichtenstein, Steve Epting and Tom Palmer's names WERE RIGHT IN THE DAMN COMIC BOOK. It's not as if the ignorance plea held much water in the first place, but come on!

Oh, and Kabuki Katze's Red Sonja piece that started this whole business back in 2005? Why, it's been offline for years. 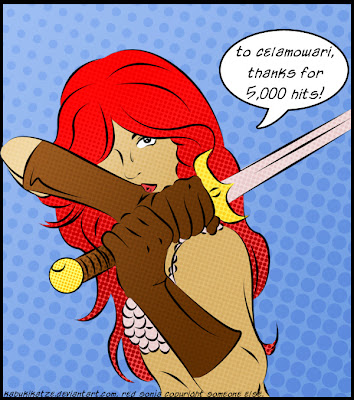 Whoops, I guess it's back now.