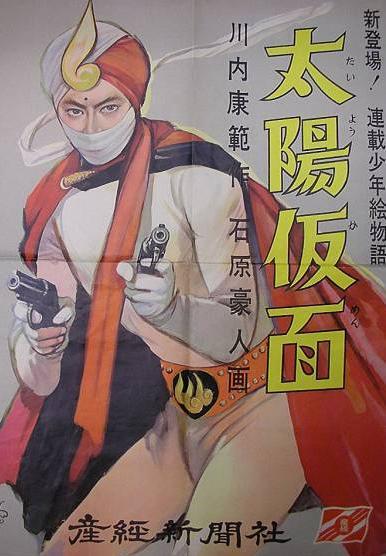 Taiyo Kamen? I’m well-acquainted with Gekko Kamen, but when this popped up on Tumblr last year, it was literally the first time I’d seen that Kohan Kawauchi also had a Taiyo Kamen.

As I mentioned the last time this came up, Gekko Kamen (月光仮面 - MOONLIGHT MASK) was Japan’s first TV hero. Taiyo Kamen (太陽仮面) is unfamiliar to me, but his name means “Sunlight Mask” in an obvious parallel. And as Joe Brogan pointed out, Taiyo Kamen looks suspiciously like a "missing link" between Gekko Kamen and Kawauchi's Rainbowman.

I have yet to find anything concrete about Taiyo Kamen. Any ideas?