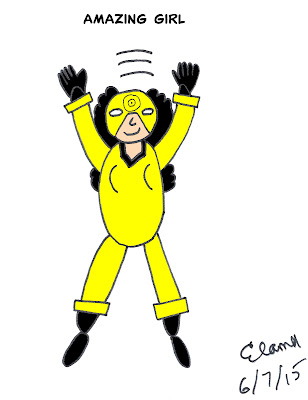 Kendal Rose is by all appearances an average, normal young woman. She grew up in a comfortable middle-class home in the suburbs of Middleburg with her parents Melvin and Priscilla Rose and her younger brother Rylan Rose. She is a student attending Eastern Midwest University with a concentration in psychology. She works part-time as a bag girl at an outlet of the Major Foods grocery store chain. Yes, Kendal seems pretty typical. But Kendal has a secret.

Early in life, Kendal discovered she had telekinesis – the ability to influence objects using only her mind. It was limited at first to moving or lifting small objects. As she matured, Kendal's telekinetic powers developed as well. She eventually found she could move and lift much larger objects, and even project so-called “thought beams” that caused impact. All the while, she kept her practicing well-hidden, fearful of the repercussions if her schoolmates learned she was different.

Kendal Rose was still a teenager when the Superhero Boom precipitated by Captain Satellite was happening, culminating in the formation of the Invincible Alliance. She came to idolize Firegirl, and resolved to use her powers to help others the way Firegirl did. Kendal created the identity of "Amazing Girl" for herself, and went about preparing for the day she would make her public debut.

That day came when a battalion of Third World agents announced a takeover of the EMU campus. None of them suspected that an innocent-looking co-ed in the crowd at the quad would slip away and reappear a short time later as their undoing. Despite being a rookie, Amazing Girl handled the badly-outmatched Third World agents with ease as her fellow undergrads cheered.

Since that event, Amazing Girl has continued her crusade to protect the city of Middleburg. This has proven to be mostly low-key, as Middleburg is not exactly a hotbed of super villain activity. Recently, she has extended her telekinetic abilities even further to include levitation, allowing her to fly. It is as yet unclear what limits there might be on her powers.

Amazing Girl's dream is to journey to Major City after graduation to meet Firegirl and the rest of that city's famous heroes. Nothing is stopping her from going to meet them right now, but she feels very shy and self-conscious about the idea. She is afraid she won't measure up to the heroes who inspired her. So she keeps putting it off, rationalizing that she'll go when she knows she's ready to stand alongside them.
Posted by C. Elam at 9:46 AM