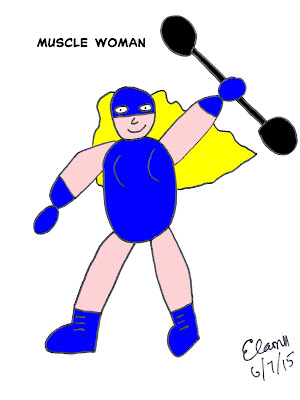 Elisabeth Huerta (“Beth” to her friends) was an excellent student and promising athlete on full scholarship at El Oceano State University when she gave it all up at the age of 19. Why would she do such a thing? So she could run off and marry Len Gordon, the backup quarterback of the El Oceano Dons pro football team and a man 12 years her senior.

Unfortunately for Beth, throwing caution to the wind didn’t exactly work out, and she wound up being another divorce statistic by 21. Attempting to piece her life back together, she re-enrolled at EOSU (only now via student loans) and set about the business of graduating. She retained the married name Beth Gordon both out of convenience and as a reminder not to stray from the task at hand again.

What Beth Gordon could never have anticipated was being kidnapped by Third World agents and subjected to a process they hoped would make her a weapon in their quest for global domination. Remarkably, Beth did not die after being dosed with a number of chemical potions and bombarded by several different rays. Instead, she found she had gained strength and endurance far greater than possible by normal means.

Third World’s brainwashing techniques were just as efficient as usual (i.e., not very), and Beth soon broke free from her captors with her super strength. Retreating to her grandparents' house nearby, she threw together a costume from spare wrestling gear left there by her grappler uncle Raoul Huerta. Determined not to let Third World get away with their nefariousness, Beth returned to the scene of the crime and single-handedly broke up the branch office that had abducted her. She coined the name “Muscle Woman” for herself during this episode.

Muscle Woman has continued to fight crime and injustice and garnered considerable fame in El Oceano. At first, she tried to keep her alter ego a secret, but the temptation to hire Muscle Woman's services out to raise money to cover her tuition was just too great. She is, however, steadfast in her conviction not to compromise her ideals just for a quick buck.

With her potent combination of brawn and beauty, Muscle Woman has become the toast of the west coast, and the hottest thing in El Oceano since Roberto Planta and Jamie Pagina founded the place in the 18th century. One of her goals is to travel to Major City someday and meet the heroes there. Not for a social call, but with the objective of crushing Third World once and for all.
Posted by C. Elam at 9:50 AM