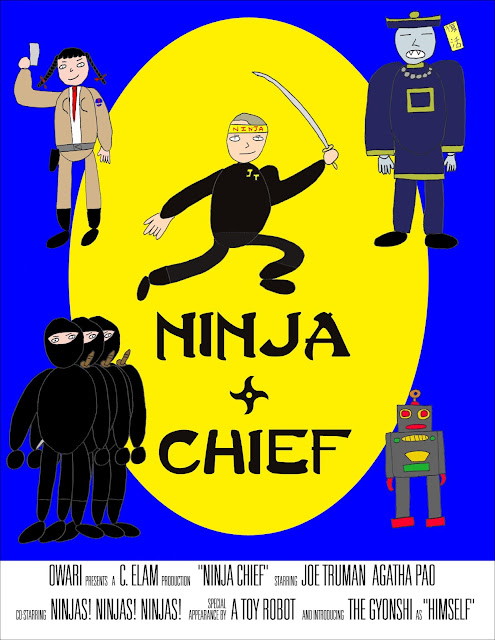 Ocelot Tombs, an American mercenary trained in ninjutsu, had embarked on a reign of terror in Taiwan. Besides the band of renegade ninjas at his command, he had gained control of a gyonshi (Chinese hopping vampire). Director of C.H.I.E.F. Rudy Boemer knew there was only one man up to the job of trouncing both ninjas and monsters in a far-off land - private investigator and freelance operative Joe Truman.

Ninja Chief is the story of how Joe Truman infiltrated the ranks of Ocelot Tombs' ninjas and destroyed them from within. Joined in the fight by Chinese-American C.H.I.E.F. agent Agatha Pao, the two warriors decisively ended the threat of the gyonshi and brought Ocelot Tombs to justice once and for all. Ninja Chief is an adventure of extraordinary magnitude featuring thrills, chills, and a toy robot!

Ninja Chief! A heart-pounding trip into a world of combat, intrigue, and horror! Coming to this screen!
Posted by C. Elam at 12:41 PM

Email ThisBlogThis!Share to TwitterShare to FacebookShare to Pinterest
Labels: my art, stories