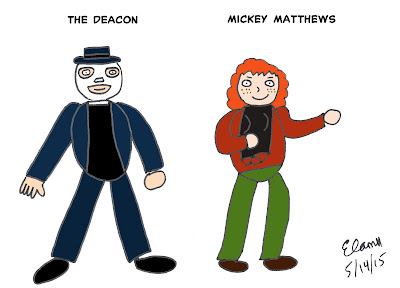 He's a deeply religious masked wrestler. She's a spunky redheaded firebrand. Together, they fight crime! That's the high concept behind the pairing of the Deacon and Mickey Matthews, a team which originated in comic books and later made it to television.

Ivan Walters produced The Deacon for the DeKalb Network as a companion series to his successful Cat-Man show. Alas, lightning didn't strike twice, and The Deacon was cancelled due to low ratings after a single season despite the endorsement of it as "wholesome family entertainment" by several prominent church groups. Even if it was a flop, the program is still fondly remembered by a devoted clutch of aficionados.

Reed Ganza starred on TV as the Deacon, with the gimmick that he never removed his mask on-screen. Ganza, an Olympic caliber amateur wrestler, hoped to use the show as a launching pad for leading man roles, but that hasn't worked out for the most part. Instead, he has donned the mask of the Deacon (with the permission of copyright holders SR Enterprises) to compete in Huey Bartek's Global Wrestling Organization (GWO) - the nation's top pro wrestling association. The Deacon has made numerous appearances alongside such grapplers as "Wild" Bill Jackson, "Hotshot" Johnny Flash, "Gorgeous" Glen Starr, Mondo Style, and Man Mountain Muldoon on cards at Major City's New Moon Garden and other arenas around the country. That pays the bills and keeps Reed Ganza in groceries between auditions.

It's been a totally different story for Leigh Adams after her stint as TV's Mickey Matthews, the sharp-tongued young rascal with a heart of gold. Adams was mainly known at the time as a stand-up comedian. She had a small role as a nurse in The Blue Ooze, and so impressed Ivan Walters that he cast her as Mickey. Since then, she has gone on to become one of the most respected thespians of her generation. Equally adept at comic and dramatic parts, she has received countless accolades and awards for her performances, and her name is considered a top box office draw.


*EDITOR'S NOTE: The Deacon and Mickey Matthews are reimagined versions of public domain characters whose authentic histories differ from this fictional account.
Posted by C. Elam at 12:44 PM