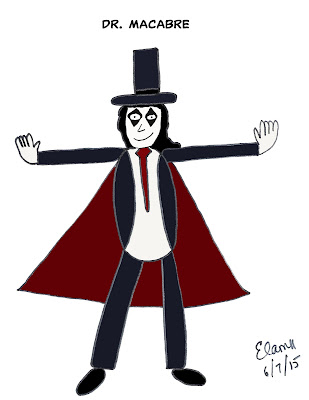 He is the Maestro of Mesmerism! Dr. Macabre is a criminal hypnotist, and the arch-nemesis of Cat-Man and Kitten in their four color exploits. He first appeared during the Golden Age of Comic Books, and is one of the most popular characters owned by SR Enterprises. Yes, even though he's a villain, Dr. Macabre has his share of fans.

Alan Norby is most commonly recognized by the public at large for portraying Dr. Macabre on a recurring basis in the Cat-Man TV series. He got the role after co-starring as the unhinged astronaut who causes all the trouble in the sci-fi film The Blue Ooze for producer Ivan Walters. Norby agreed to guest star on "that funny book deal" for Walters as a favor. Who had any idea it would be the biggest thing of Alan Norby's career? Certainly not Norby, who would have running screaming into the night if he had known.

Alan Norby has always been a bit odd even by actor standards. He practices a very unusual form of method acting that causes him to sometimes get too caught up in the parts he plays. Being the bad guy on-screen can make him quite unmanageable in real life. Still, there is money to be made as Dr. Macabre in the new Cat-Man movies, so he does his best to cope with the effect the performance has on his psyche.


*EDITOR'S NOTE: Dr. Macabre is based on a public domain character whose authentic history differs from this fictional account.
Posted by C. Elam at 12:51 PM