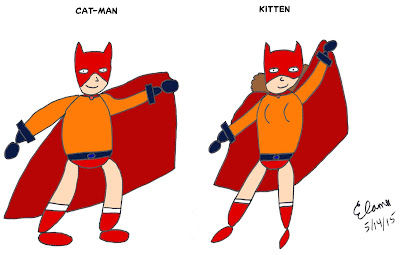 Cat-Man is a superhero with the outlandish origin of having been raised by tigers in the wild. Returning to America as an adult, he took up the mantle of Cat-Man to wage war on the criminals who preyed on the innocent. Joined by his partner Kitten, Cat-Man is a force to be reckoned with in the never-ending battle against evil.

Cat-Man and Kitten are two of the most popular comic book characters in the world. They are owned by SR Enterprises, which also counts such luminaries as the Deacon and Black Widow in its stable. The Dandy Duo date back to the 1940s, and have been featured in a trendsetting TV series on the DeKalb Network and a subsequent string of blockbuster films.

Ivan Walters is the producer responsible for bringing Cat-Man to the screen. He credited the idea as coming to him when he found some old Cat-Man comic books in his local barber shop. Previously best known for the cult sci-fi film The Blue Ooze, Cat-Man quickly became the hit that would define his career. This popularity persisted even after the television version ran its course, and Walters shrewdly retained production rights for what turned out to be a top-grossing movie series.

Bruce Chase played the titular hero in the Cat-Man TV show. Noted for his exaggerated and overdramatic delivery, he was perfect for the part, and that landmark program made him a star. Though he went on to success as the title character Chip Lomac in the cop show Lomac! (also aired on DeKalb) for several seasons, recognition as a serious actor - what he really desires - has eluded Bruce. He is still doggedly optimistic, and convinced that all he needs is the right project - such as portraying Captain Satellite in a film adaptation of that hero's life story. In the meantime, he continues to cash in by reprising the Cat-Man role for movies, commercials, trade shows, and basically anywhere that will have him.

Eve East co-starred on the TV series Cat-Man as the hero's daring and delightful sidekick Kitten. After headlining as "Laverne Stevens" in the motion picture No Matter Where, she left acting behind and entered the arena of politics. Despite having recently been elected mayor of El Oceano, California (the largest city on the west coast, and entertainment capital of the world), she has come out of retirement for the gaudy paychecks of the Cat-Man films. In deference to her new responsibilities, her involvement is somewhat reduced - much to the discontent of fans everywhere. She is proud of her time as Kitten, but a little nonplussed when it’s all people want to talk about when they meet her.


*EDITOR'S NOTE: Cat-Man and Kitten are based on public domain characters whose authentic histories differ from this fictional account.
Posted by C. Elam at 12:37 PM