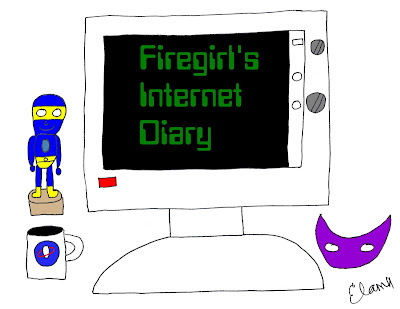 "Firegirl's Internet Diary" was originally a story, and the first version of it was initially posted July 7, 2010. This illustration was created to accompany a revised version of that story, and it was initially posted August 23, 2015. The prose version of "Firegirl's Internet Diary" has been retired with this incarnation of the Owariverse due to the inherent issue of keeping it relevant in what is supposed to be a "timeless" setting. However, the events of the story still "happened" and details from it have been/will be incorporated into the character profiles. Meanwhile, this picture is too good to just sit unused in a folder, so here it is.

Email ThisBlogThis!Share to TwitterShare to FacebookShare to Pinterest
Labels: my art