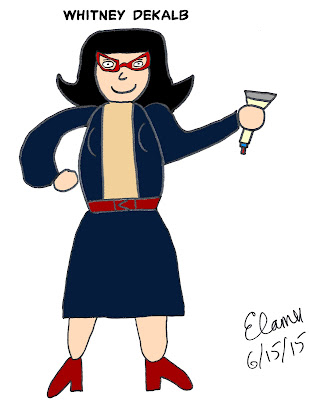 Ladd DeKalb was the visionary inventor who founded both DeKalb Laboratories and the DeKalb Television Network many years ago. DeKalb Laboratories has been at the forefront in technical innovation for electronics manufacturing for decades, and DeKalb TV sets are considered the best on the market. The DeKalb Television Network, on the other hand, has not exactly had its finger on the pulse of the viewing public since its inception.

Both DeKalb companies have stayed in the family (as separate entities) for generations, and Whitney DeKalb is the current chairperson of the DeKalb Network board of directors. It has fallen to Whitney to shed DeKalb's perennial also-ran status. A driven and competitive woman, Whitney considers DeKalb's chronic underachievement compared to its rivals the Major Broadcasting System (MBS) and the United Broadcasting Company (UBC) as a constant source of irritation. She has made it her goal to not only compete with MBS and UBC, but to beat them and become number one in the ratings.

To drag DeKalb up from the bottom, Whitney has tried to identify what actually worked for it in the past. The most popular shows in DeKalb history are those produced by Ivan Walters like Lomac! and Duke Palone, Private Eye, but most especially Cat-Man. DeKalb's flagship station WMC-TV Channel 5 in Major City has also achieved considerable local success with the Global Wrestling Organization's Global Championship Wrestling on Saturdays. Whitney gave the GWO a national primtetime slot in the hopes they could duplicate their regional performance, but Ivan Walters' hit motion pictures meant he couldn't be bothered with TV anymore.

Then one day, Whitney had an epiphany. Why waste time with fictional superheroes when there were real ones right in her proverbial backyard of Major City? She got in touch with Paul (Captain Satellite) Mann as fast as she could dial a phone and offered him the chance to use DeKalb as "his" network for whatever content he chose to provide them. It was an enticing and unprecedented proposal, and before he even realized it, Mann had agreed.

Captain Satellite does his best to not exploit his unique relationship with DeKalb, but it is a delicate balancing act. He uses his airtime mostly for educational telecasts and the occasional old B-movie like King Kong vs. Frankenstein. There has been grumbling from DeKalb's competition over the arrangement, but Cap has assured them he shows no favoritism when it comes to access to him. For her part, Whitney is ecstatic, and has even changed the name of WMC's news shows to Major City Supernews to better capitalize on the Captain Satellite/DeKalb synergy.

Ironically, though she is deeply involved in programming, Whitney DeKalb's true love is being behind the camera. She broke into the TV business as an apprentice camerawoman, and she has grown into a master of the craft. She just doesn't have the time now due to all her other responsibilities. Her dream is to one day be able to roll film again. She'd even shoot the wrestling matches, despite her disdain for promoter Huey Bartek as a "shady customer" she only associates with out of necessity.
Posted by C. Elam at 6:45 PM