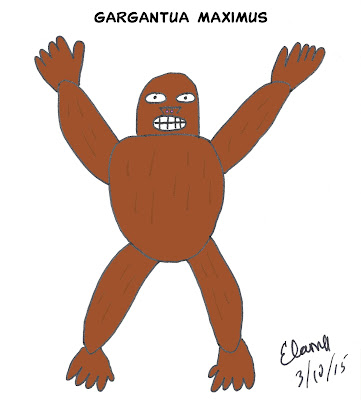 Ladies and gentlemen! Children of all ages! Presenting the wonder of our age - Gargantua Maximus!

To call Gargantua Maximus a "giant gorilla" is not technically correct, even though he often is one. He was originally just an ordinary gorilla until Dr. Sandor Varkoff got his hands on him. Varkoff's experiments gave the primate the ability to grow to enormous size. Of course, the mad scientist then promptly lost all control of his creation and had to be rescued himself.

Gargantua Maximus is not inherently evil or belligerent, but he can become violent when provoked. His unpredictable size changes (heights from 15 feet to 150 feet have been observed) render him a menace to society that must be contained. There's also the little matter of his habits of scaling skyscrapers and making moon eyes at leggy blondes.

For the record, it should be noted that Gargantua Maximus has proven valiant in fighting monsters far more dangerous than he has ever been. He has tussled with dinosaurs, tangled with a sea serpent, and tackled a giant shark. He was even pressed into service when a deranged C.H.I.E.F. agent absconded with a confiscated Macro Warrior. So Gargantua Maximus is not all bad.

After his last escapade in civilization, Gargantua Maximus was sighted swimming across the Pacific Ocean. Reliable reports indicate he is now living on a remote South Seas island. It is hoped he will remain there.
Posted by C. Elam at 7:17 PM